I’m finding that one familiar face can mean the difference between drowning in an uneasy state of limbo, and feeling like you’re right where you’re supposed to be.

The arrival of my friend Kevin on my third day in Barcelona was the equivalent of a powerful right uppercut to the queasy uncertainty that had plagued me during the previous couple days—which I’d spent in near-hermithood within my hostel. I suddenly found myself bearing the (self-appointed, of course) responsibility of ensuring Kevin’s vacation as my travel companion was a great one. It turned out to be the push I needed to snap out of hiding mode, and launch into touring mode. I studied my map of the city, and off I marched to meet my friend at his hostel.

Kevin and I met back in 2009 when my friends and I were traveling in the Amazonian jungles of Puerto Moldonado, Peru. A slight, wiry man pushing the north end of his mid-60s, Kevin’s energetic, everybody’s-a-friend personality can scarcely be contained in most spaces. A child of the Bronx, and master of a diverse assortment of trades from New York City taxi driver to baggage handler at big Las Vegas casinos (the MGM Grand is his current gig), with stops in 1960s San Francisco thrown in for good measure—this guy is a giant pile of very un-P.C. jokes, adventuresome spirit, and amazing stories. I’ve begun calling him “Kevin Gump” because he’s had more brushes with presidents, celebrities and historical events than Forrest Gump (do you know anybody who once talked with, and took a piss next to Bob Marley?).

At Kevin’s hostel, I was greeted with a hug and typical raucous, gravelly Kevin laugh. A recently acquired cold made his laugh and unmistakable Bronx accent even more rocky, a vocal blend of Al Pacino and a straight Harvey Feinstein. After a quick obligatory exchange of airport horror stories, we headed out for celebratory dinner on the famous La Rambla, nearby.

However, the street which started life as a sewage stream in the 14th century, does manage to work in a few good restaurants with a more genuine feel. We savored delicious tapas, and then stumbled across a large plaza rimmed by restaurants and outdoor seating. We grabbed drinks in the cool evening, and partook in some quality people watching while Kevin regaled me with an amusing story about the creative lengths he went to (leaving no ‘gay’ or ‘insane’ box unchecked) in order to skirt being sent to Vietnam back in the day.

Even though I’d only been away from home for a half week at this point, it was a relief to have a friend to laugh with. Imperceptibly, my angst was beginning to evaporate, replaced by the familiar excitement for travel I had expected to feel all along.

During the next two days, we hit the tourist trail hard.

We boarded and de-boarded the Hop On Hop Off buses relentlessly in order to take in the entirety of Barcelona during our stay. We started with my hands-down favorite structure—Gaudi’s breathtaking Sagrada Familia.

Perpetually unfinished, Sagrada Familia has been under construction since 1882 (Gaudi died in 1926 after being hit by a tram), but supposedly it will finally be completed by 2026.

With its melted-wax-like spires and shots of colorful Candyland-esque details mixed with cubist and traditional touches, the enormous church seemed to have been Frankensteined together from materialized fragments of some very strange dreams.

Early April in Barcelona graced us with blue skies, but intermittent chills; deceiving when it came to clothing choices. We shivered from the windblown top level of the buses despite wearing layers, but still managed to enjoy the mind-blowing architecture—including a few spots that were featured in scenes from one of my favorite movies, Vicky Cristina Barcelona.

We also sweat like mad while hauling ourselves through the haphazard hilly paths, hidden Alice-in-Wonderland-like surprises, and random sensory treats of Gaudi’s Park Güell.

Gorgeous, sprawling city vistas frequently caused us to stop in our tracks to gawk. We delighted in unwittingly discovering quixotic botanical gardens, elaborate fountains, and the Miro Museum (which, coincidentally, we had wanted to explore anyway). 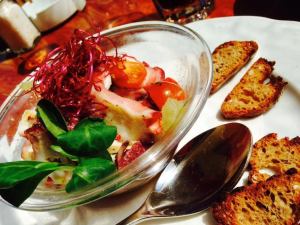 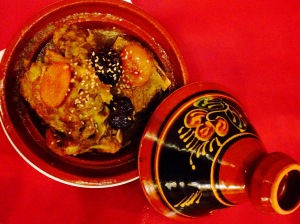 Moroccan food – we went twice it was so good!

I could live in Barcelona, no question. It’s fascinating, cultural, thrilling, and shockingly clean (I think I saw a total of two homeless people, and one errant crumpled McDonald’s bag on the sidewalk).

But the locale that I fell in love with above all else was in fact 50 kilometers outside of the city; nestled into photogenic clusters of smooth-stoned mountain peaks—the 1,000+ year-old Montserrat Monastery.

Santa Maria de Montserrat Abbey (its official name) was established by the Visigoths in 888 A.D., and some of the current buildings were constructed as early as 1025. The monks, most of whom start training as boys, actually live on the premise (though we didn’t see any).

As part of the 5-hour tour from Barcelona, visitors are encouraged to light prayer candles, roam around the various chapels, take a tram up the steep mountainside to see views from the top, and sample tasty liquors made from walnuts, hazelnuts and other yummy flavors—the proceeds go toward the maintaining of the monastery.

On our last day in Barcelona, we did the one thing that absolutely everyone we knew who had visited before recommended: we went and saw a soccer game. It was cold. It was fun. And we left before halftime—but it still counts. 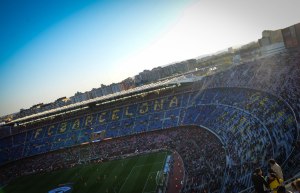 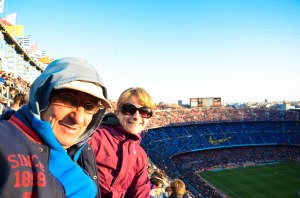 It was COLD up in the cheap seats!

Kevin—being the unrestrained Martin Scorsese type to my hesitant Woody Allen type—made friends everywhere we went. From the Montserrat tour leader to the taxi drivers to the restaurant waiters to other restaurant patrons. Within minutes of sitting down at one tapas place near the water, Kevin had procured Barcelona soccer pins, gifted to each of us from a family sitting at the next table who barely spoke English while Kevin barely spoke Spanish. By the end of the meal, he had given them his card and insisted that if they were ever in Las Vegas, they should look him up and he’d give them a tour. I smiled and shook my head whenever I heard a word I understood, which was not often.

By the end of our Barcelona leg of the journey, I was feeling much less like a lost, sick puppy, but even so, I fully intended to take a cue from my friend’s outgoing ways, taking mental notes. There were only three more days to absorb all I could from this master of gab—our next and final stop together would be off the coast of Barcelona—on the Balearic Island of Mallorca.