Silhouettes of trees formed evanescent apparitions, appearing vividly as they were passed, then fading away into misty farm fields on either side of northern India’s Yamuna Expressway.

At 6:45 on a Tuesday morning in November, all six lanes of the smooth stretch between Delhi and Agra were equally ghostly in their lack of traffic.

It was a condition I had not, until then, witnessed in India.

The silver jeep carrying myself and three other American girls drifted lazily partially into vacant neighboring lanes as we sailed south toward Agra.

Our driver and person-herder for the day was Pradeep. Generally, Pradeep spoke to us only when needed, as his English seemed fairly limited. Though he had enough words to ask whichever of us was sitting in the front passenger seat the eternal prerequisite inquires fielded by all female travelers from everyone, everywhere in Asia:

Whatever the answers, the line of questioning inexorably ends in silence: the questioner is either satisfied, dissatisfied, and/or quite concerned for your future. For me, it’s usually the last one. It lends a particularly fantastic awkwardness to the silence.

Marriage is at the core of, I would venture to guess, most cultural and religious stories. At least, it’s certainly solidly there in the majority of stories and mythology I’ve heard or read; Hindu, Christian, Greek, Roman, Norse, etc.

More accurately, though, love is at the core.

It’s also at the core of one of India’s most enduring and endearing true love stories, which by now has taken on mythic proportions.

That, of course, is the epic tale of the Taj Mahal. 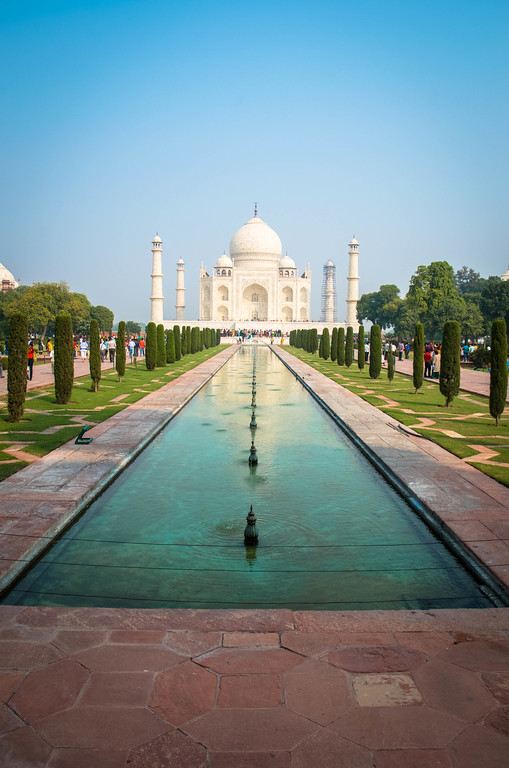 I fuzzily recall first hearing the story of Shah Jahan and his favorite of three wives, Mumtaz Mahal, when I was 15 or 16, in high school. But, certain facts, like that Mumtaz had died giving birth to their 14th child, never quite made it into my permanent memory files.

So when I stepped through the titanic front gates and beheld with my own eyes the nearly 400-year old flawless, and flawlessly symmetrical tomb of Jahan and his beloved, and our guide’s spilling of the specifics commenced, I listened hungrily with fresh ears.

Interestingly, this ode to everlasting love was actually inspired by the tomb of I’timād-ud-Daulah (often called the Baby Taj), mausoleum of Jahan’s father, the fourth Mughal emperor.

I shuffled in the direction of the pristine behemoth on a walkway between the reflecting pool and postcard-perfect lawns. The distance was far, far longer than it appears in photos — which, by-and-large, somehow omit the throngs of human beings (3 million this year, up from 2 million last year) crushing together to, like me, see for themselves one of the New 7 Wonders of the World.

As I stopped to get some shots, a current of Muslim Indian women draped in brilliant-hued, hajibs floated lightly by. Many carried babies and young children on their hips. It struck me at that moment how this symbol of love before us, really emcompasses far more than romantic love — it’s also a poignant symbol of family love.

The bonds of husbands and wives and children stirred around me in a blur of, I imagined, palpable devotion.

Outside and inside, creating vines of contrasting jewel tones against white marble, are inlays of coral, jade, yellow marble, lapis lazuli, and jasper.

Armed guards stood by at the entrance to the Taj, serving as a warning against those, like me, who would do any shooting of the artistic variety inside the tomb. My camera had to be put away.

But I will say it was nearly as impressive inside as out.

The river of people flowed out the opposite side of the Taj and branched into steaming, sweaty tributaries. I decided to detour left, where a red sandstone mosque stood — it’s twin is directly across the way — dedications to Jahan’s other wives.

The also-rans did not go completely unrewarded upon their deaths. Fortunately, because this beauty was not the star attraction, it was fairly (wonderfully) free of congestion. I took my time meandering through its magnificent feats of architecture.

The Taj was painstakingly assembled over 12 long years, finished in 1642. The shah’s proof of love cost his empire today’s equivalent of a whopping $827 million U.S. dollars.

The story goes that for his next act, he planned to build a matching mausoleum, in black, for himself across the Yamuna River. That churned up serious doubts among the royal crew, who thought he must be losing it.

Ten years later, Jahan became sick and battles for power between four of his sons broke out. The winner was Akbarabadi Mahal, who declared his father (completely recovered at this point) incompetent to rule, and had him put under house arrest in nearby Agra Fort.

It was considered an act of kindness that the son allowed his father the gift of being able to gaze upon the Taj Mahal from the fort’s (incredibly elaborate, impeccably detailed) windows. 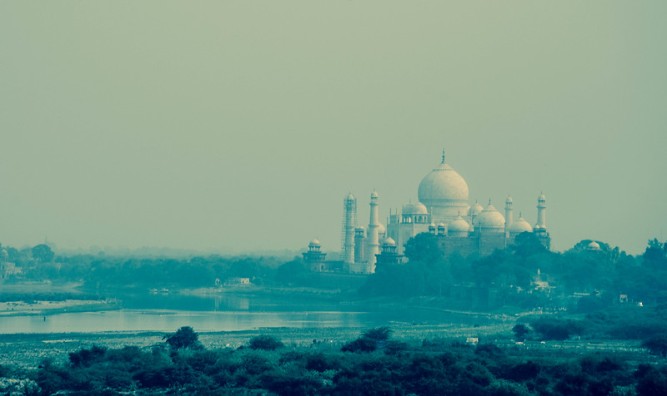 Back on the quickly dimming streets of Agra, we were heat-worn and exhausted. Pradeep inched the the silver jeep along as horns of every pitch waged war against an absolutely inert traffic jam.

We sat for close to an hour, time I used to gaze through the window like Jahan at the loveliness and chaos outside.

Locals zipped by on foot and bicycle over the decrepit pathway next to the road. They bought bags of roasting peanuts. Men sat in chairs at informal outdoor tables to get a quick trim or shave from shaggy barbers. Flowers, marigolds in particular, were purchased. Vegetables — peppers, green beans, eggplants, onions — were carefully pondered, pointed at, and wrapped up. 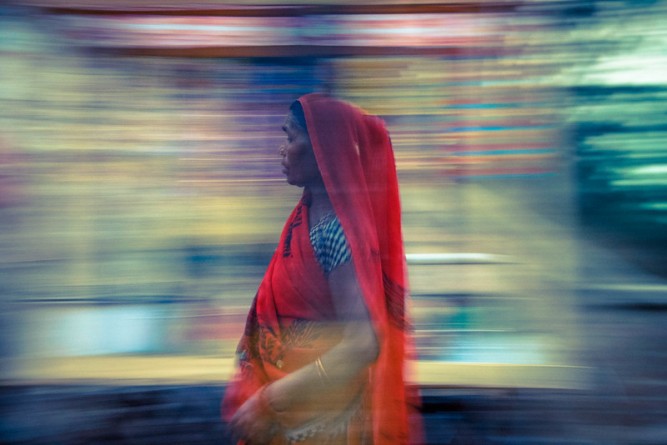 We crept ever so slowly past a tree strewn with small scraps of fabric, wavering slightly in the breeze like odd technicolored fruit. There was so much of it that some had clearly dropped to the ground, and was pushed to the side. I asked Pradeep why there was cloth in the tree.

“It baby clothes,” Pradeep explained, pausing to search for certain words, and catching my eyes in the rearview mirror. “People, they believe tree has magic for sick baby. They come, put baby clothes in tree, and maybe baby get better.”

That gave me chills.

For the umpteenth time that day, I was treated to a strong shot of an undeniable human fact: Love is powerful. In all forms. Love for one’s god. Love for one’s self. Love between parent and child.

And, of course, romantic love.

Perhaps the next time the inevitable “You married?” line of questioning comes flying at me, my answers will be something other than a series of embarrassed stutters. Perhaps I’ll cleverly ‘borrow’ a good story to tell them. A myth. A fable.

About a legendary enduring love. 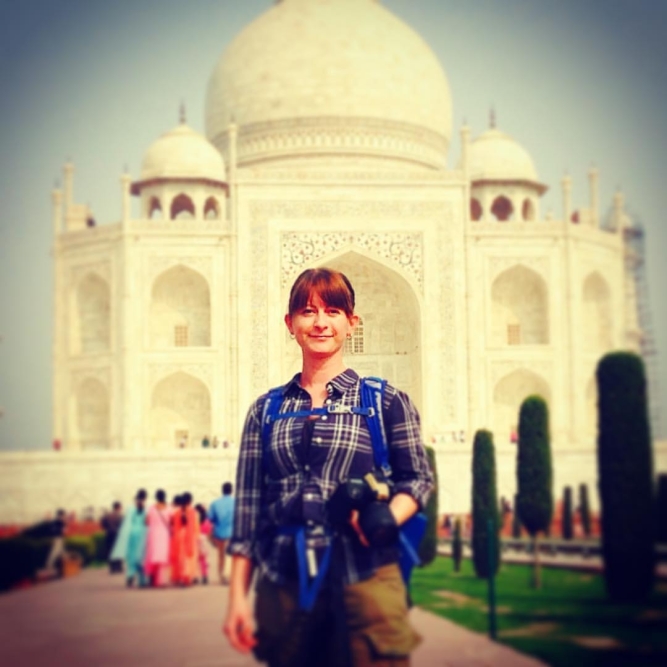 At last, with the help of good samaritans who selflessly stepped out of their vehicles to direct traffic, we were able to break away from the honking mob.

We merged once again onto the Yamuna Expressway and Pradeep guided us back to Delhi between unseen fields of trees.

Next up: Stories and photos from my sojourn to gorgeous Sri Lanka!