Day One: A Plane to Spain

“Traveling is a brutality. It forces you to trust strangers and to lose sight of all that familiar comfort of home and friends. You are constantly off balance. Nothing is yours except the essential things – air, sleep, dreams, the sea, the sky.” – Cesare Pavese 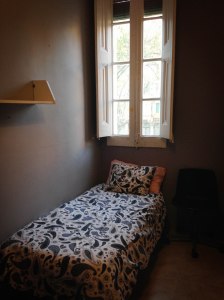 My Round-the-World Journey for a Year: Day 1

Nacho, the patient, kind-eyed proprietor of the Traveller’s Flat in Barcelona unlocked the door to my room and motioned for me to enter. The room was high-ceilinged but small and extremely spartan, with a bit of mauve paint on two walls; the kind of place a nun would love, I thought.

After a mini tour of the flat—kitchen and bathroom down the hall—Nacho left me alone in the softly echoing room. And suddenly, I realized I had never felt quite so alone in my life. I set down my day bag, and let my huge backpack crash onto the tiny bed like an enormous calving iceberg.

I took in the scene in blaring silence. The fact that everything before me was now my life flooded me with something resembling low-level panic.

What have I done? What did I get myself into?

I looked through the window, two stories above bustling, modern Passeig de Sant Joan and saw cheerful Barcelonans below laughing and sipping espresso in groups of twos and threes outside a cafe. The chatter was in Spanish, and I couldn’t understand a word of it. I mentally berated myself for not ‘brushing up’ on my high school Spanish a little more before I left.

I sat down on the bed and wondered if I had made a very. massive. mistake.

Visions of my cozy apartment, thousands of miles away, hung like a sun-warmed haze in my mind, untouchable. I wouldn’t see it again for nearly a year. I could only hope that this feeling would not last long—that I, too, would warm up to my new reality, and the visions of home would calmly dissipate like even the thickest haze always does, eventually.

During the past nine months, I had carefully read about and researched how to be a successful ‘digital nomad’ armed with just a laptop computer, couple of cameras, a few items of clothing and that’s it. I’d be off and running, discovering the world. Happy as a monkey in a banana tree forest. Free as a bird…if the bird were lugging its nest around with it everywhere it went. I glared disdainfully at my bags, which appeared and felt as if they had been stuffed with boulders.

I’d watched several videos and read countless articles about packing light. I thought I had it down—a simple math problem with a finite answer: If bags A and B have X amount of space, and person C can only carry X amount of weight, then items inside bags A and B will therefore fill X volume.

At the San Francisco airport at 5AM on April 1st

I’d chosen versatile, lightweight clothing that could work for any situation. I’d thought small and light; a paper-thin quick-drying microfiber towel, tiny toiletries bag, itsy-bitsy hair dryer and the smallest flat iron I’d ever seen. I’d tested several times to make sure it could all fit into just my larger bag if needed, and it had. So confident in my packing prowess was I, that I’d even written and recorded a story on the local National Public Radio station entitled “Traveling Light.”

What a sham! I thought. I had labored breathlessly to carry the load through all three terminals of the San Francisco airport when my British Airways plane ticket had mysteriously been turned into an American Airlines ticket (as they are wont to do, I suppose). And I had thanked the Spirit in the Sky for a wonderful thing called bag checking.

Once in the vast metropolis of Barcelona, it had been a real struggle to get myself and the two bags up the flights of stairs at the hostel…and it was only the first day of an entire year of hauling them around! Like Cheryl Strayed in the book Wild, I lumbered and swayed under the weight like a drunken donkey. I found myself acutely regretting the last-minute decision to cram as many extra ‘must haves’ as I could into the bags, shattering my meticulous packing plans.

A year of this was simply inconceivable.

Exhausted, I pushed my self-contained mountain of excess to the floor and prepared to crawl under the covers to sleep off my doubts and jet lag, vowing to go all kinds of Buddhist monk on my bags and fill the metal trash can when I awoke. Before settling in, I fished around in my day bag for one item that I knew would not be taking a nose dive into the trash; a little ram given to me by a friend before I left. I placed the fluffy fist-sized figure, which I’d named Rambo, on a bare shelf in the bare room.

According to Chinese lore, the Year of the Ram (2015) is an auspicious year for travel. It made me pause and remind myself of the incredible sights I was going to be seeing this year, which I wouldn’t otherwise see if I were sitting at home in my cozy apartment, doing my old comfortable job, or hanging out and doing the same fun things with my utterly wonderful friends.

This is my year of change.

This is the year I break away from routine, claw out of the rut of the everyday, and haul every unwieldy pound of my new life on my back through the ups and downs, to find the magic that the world keeps in secret faraway places. I’ll be reunited with old friends, and will do everything I can to make new friends from strangers along the way—no matter how much my timid inner self protests. My familiar comforts will have to be wherever I make them, starting right here in this small spartan room; this speck, this tiny flicker of things to come.