The Magical Dragon Caves of Majorca

We’d heard that the Balearic Island of Majorca is the most stunning place on Earth.

Kevin’s late mother once told him it was the most beautiful place she’d ever seen. I had read the same sort of sentiments in various articles and travel blogs. This much-touted island was only a quick 45-minute flight from where we were in Barcelona, so it was clearly a must-see before moving on to, perhaps, Valencia or Tarragona.

After dropping our bags in our hotel rooms, we wandered outside into the sunshine and wended our way through the small town of Arenal’s charming streets, lined with bright, imperfectly painted stucco houses, aging elaborately designed wrought iron gates, and puffs of clothing airing from lines strung across back patios and front porches.

When we reached the water, we were greeted by a palette of electric blue hues from sea to sky.

The beachfront of Arenal, Majorca

Within an hour of gawking at this bewitching beachfront from nearby Cafe del Sol, while sipping the best mojitos either of us had ever tasted, an executive decision was made: we were going to stay here for as long as possible. 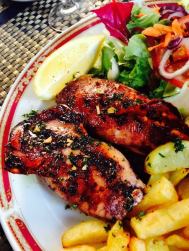 The next couple days were filled with delightfully little aside from relaxing by the beach, eating, writing, reading, and more eating.

In even the cheapest nondescript cafes, incredibly fresh seafood could be wrangled with ease, and we consumed it en masse. Flavorful, tender grilled squid and fresh sea bream made for memorable meals at the tiny restaurant across the street from the hotel, where Kevin made instant friends with the bartender, a shy man who aspired to – someday! – see the many wonders of Las Vegas, Kevin’s home town.

Our third day in Majorca, however, would be something entirely different.

The island is known for not only it’s dazzling beaches and great scuba diving, but also for the famous Cuevas del Drach, or Drach Caves—Drach translates to Dragon, so in the end, they are in fact…

The Dragon Caves of Majorca

We sped along in some guy’s decades-old car, it was perhaps an Italian or Spanish brand which I’d never heard of. The tour van that was scheduled to pick us up at the hotel either never came, or the guide didn’t bother venturing into the hotel lobby to retrieve us. Whatever the case, the van was on the tour route and we were not on it—a problem that was remedied by a burst of quick, forceful words in Majorcan via phone from our trusty hotel concierge, Manu.

In shockingly short order, our ride breezed in, and we were on our way, zipping through the capital city of Palma and then into the gorgeous countryside. Old farms, disintegrating castle-like structures, and a great number of curious windmill ruins flew by as we raced over hills of gold and green.

Finally, we caught up just as the tour van was getting ready to disembark from the first stop, a cheesy Majorcan pearl showroom (which I couldn’t care less about). The next stop was the one we were there for: las cuevas.

Like a herd of cautious shuffling cattle, the line of tourists at the entrance to the caves slowly descended a cement stairway, leaving daylight behind. Once down in the first cavern, my eyes adjusted to the dimness and jagged silhouettes of stalactites and stalagmites came gradually into focus.

Some looked like pointed dragon teeth, others resembled upside-down cityscapes. Many areas were half-filled with water, creating an eerie green cast, and reflections which made it difficult to discern the beginnings and ends of the rock formations.

The ethereal caves and their otherworldly features, carved and nourished by the waters of the Mediterranean Sea, have been developing at a rate of 1 cm per year since the Miocene era. They were discovered in the Middle Ages and have made numerous guest appearances in well-known writings—including the stories of Jules Vern—ever since.

For me, navigating the mammoth caverns felt like an exploration of a different planet; a fantastical universe of Tolkienian inspiration. I let my imagination seize fleeting moments, when the rambling crowds were far ahead and quiet settled around me, allowing for a stray second to pretend that I was the first person to ever set foot in this magical realm. For an instant, I was an explorer of the Middle Ages, wondering if I’d stumbled across a subterranean version of Heaven… or a kind of Hell. What lie beyond the dancing light of my torch? Could the flickering shadows hold, perhaps… a lair for snarling, fire-eyed dragons?

“Senorita, por favor, you cannot stay so long.” A ranger would appear, dispersing my fantasy and obliging me to catch up to the group.

Near the end of the tour, the cave opened up into an enormous space. To my right I could just make out a great underground lake in the blackness, and to my left, rows of wooden benches were already filled in by the people in my group who, unlike me, were not laggers. I found Kevin and we sat down near the back, curious as to what this was all about.

At a microphone placed front and center, a man told us in Spanish, then German, then English that the acoustic quality of this part of the cave was such that it lent itself well to music. And with that, the dim lights went out completely, and in the distance we heard the echoing notes of a string quartet, followed by the sight of soft twinkling lights. Two boats carrying four musicians paddled slowly toward us, playing the music of Chopin, who we’d learned earlier, had once briefly lived on the island, a fact which was never forgotten by the Majorcans.

The heartbreaking music floated across the lake, sending goosebumps up my arms and a piercing ache through my chest. It was beautiful. Unexpected.

It went on for at least 10 minutes, during which time nobody in the previously fidgety crowd moved a muscle. At the end, a burst of applause vibrated through the entire cavern, a great hooting and smiling engine of humanity moving together within the walls of ancient splendor.

The gorgeous spell was broken, falling apart swiftly as the lights came up and we were ushered toward the exit, into harsh daylight. Back into the tour van we went, returning at last to our hotel.

The next day Kevin would leave Spain and head home to Las Vegas, bringing to a close a fantastic experience with the first of several travel companions/friends who would be joining me on my year-long global journey. On the last day of our adventure, we took one final tour of Majorca’s bright and unforgettable shoreline before saying adios.

The next stop, beginning three weeks of travel on my own, would be the sunny city of Seville, Spain!