Man-Eater: Piranha Fishing in the Amazon

As I stared into the murky brown water, all I could think of were the legends of their tiny razor teeth quickly stripping the flesh from any creature who happened to pick the wrong place to drink—their numbers in the hundreds; a swarm of death and fins.

My friends and I excitedly boarding the Piranha Tour boat

Our guides for the Piranha Tour appeared totally unfazed by what might be lurking beneath the surface of this section of the Amazon tributary. Our group boarded a narrow boat at sunrise, donning life vests that were handed out to us one by one.

I mentally noted that the ancient orange vests would be completely useless against an attack by blood-frenzied snapping jaws.

The sun was climbing slowly over silhouetted jungle canopy, glazing swirls and eddies from the boat’s wake in gold as we chugged up the sluggish river. The morning air was earthy and swampy, and still cool, which we were thankful for. Aside from our quiet chatting, the calling of birds and the occasional racket of a howler monkey in the distance, the lush environment was fresh and hushed. 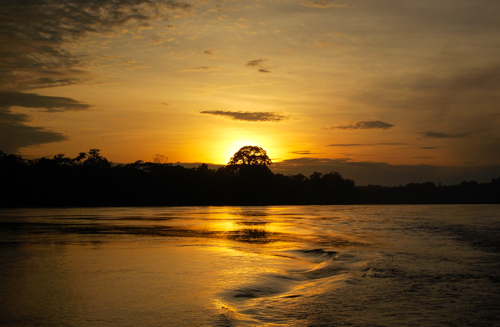 Sunrise over the river 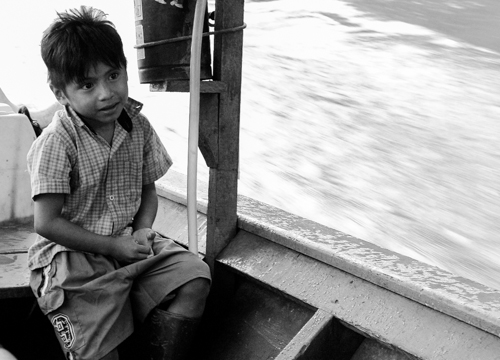 The sun was in full view when the river expanded to form a breathtaking lake. The illuminated scene filled me instantly with tranquility; I sighed and gazed googly-eyed at it, feeling every muscle in my body slacken.

Wow, I thought. I’m so lucky to be here. 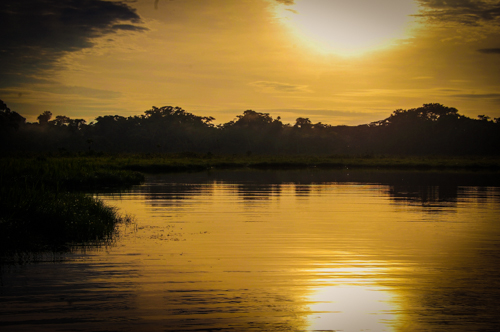 We were transferred to a larger pontoon-like barge, and the nature tour officially began. Our experienced guides pointed out an array of creatures as we went along.

Sleeping bats on a tree trunk

Cormorants in between fishing trips

It turned out that I was lucky in more ways than one.

A family of (endangered) giant river otters had not been seen by the guides for a while, and they had started to get a little worried. But the family appeared smack in the middle of the lake that morning, and in fact they had a new little addition to the family!

As thrilling as it was to see these animals…they weren’t really why we took the tour. Anxious anticipation began to hover over the barge as the sun rose higher. Barbaric images of gnashing teeth and gills and red eyes saturated my thoughts.

And then, the suspense was over.

Our barge halted near a grove of trees and our guides announced that we were now floating directly above a horde of piranhas. I peered over the side, scanning the muddy water for a glimpse of the mini monsters. I thought I could make out darting shadows, but nothing more.

Our guides began handing out fishing poles to anybody who wanted one. They loaded the hooks with small, silvery flinching guppies, which to me, looked terrified, as if they could sense the grisly fate that awaited them. 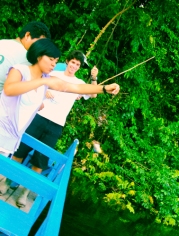 Leave it to the guide to catch the only piranha.

We waited to see what would happen…

It turns out piranhas are smart little devils! One after another, a shout of excitement would erupt, followed by a mad turning of the reel, which would inevitably bring up an empty fishing wire with the lure snapped clean off. We might see a flurry of activity right below the surface…but no fish. No prickly fins. No chomping teeth.

The sun was now centered in the sky and the humid air had grown hot and sticky. Our initial excitement was sinking faster than the succession of fishing lures being dropped into the water.

At last, a fighting piranha was hauled up—it flapped with surprising power for such a small creature. Still on the line, it was passed to the young Peruvian man who was our lead guide.

Handling it with practiced know-how, he flattened back the fish’s spiny fins and removed the hook, then used it to give us a good long look at its blood-red eyes and flesh-shredding jaws. 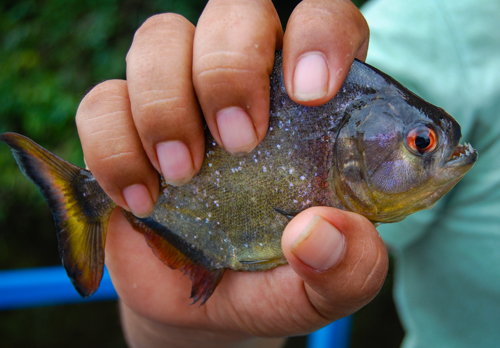 The teeth were actually a bit smaller than I had imagined. But our guide demonstrated how quick and reflexive their jaws could be by placing a leaf in its gaping mouth—the jaws bit down on the leaf in a flash, creating a perfect U-shaped puncture.

My friend Kevin volunteered to steer the barge

The guide also told us that, like many animals who have been the focus of certain horror films, the piranha is not quite the menace it’s been made out to be. Yes, there are deaths caused by piranhas every year in the Amazon, but they are not the top of the food chain even in this small lake. Pythons and the adorable otter family (oddly enough) are the stuff of piranha nightmares here.

Our guide returned the “man-eating” piranha to the water and navigated the barge back to our awaiting ‘speed’ boat.

We returned to our jungle camp for lunch—which, ironically…was fish.