It’s raining in Hanoi. Smog mixes with the foggy precipitation, laying a murky veil over the roiling city.

At 10 o’clock in the morning, I’m headed away from the city center in the direction of Halong Bay on Vietnam’s northeastern coast.

Two hours ago I was abruptly hustled off of my original (nearly empty) local bus, which had stopped smack in the middle of a crawling traffic jam. The ticket manager answered the confused questioning look on my face by pointing, “Go that bus!” and I was left to follow the others ejected riders and weave through a knot of angry, bellowing cars to board an adjacent (nearly full) bus.

A busy side street in Hanoi

I’m now perched on a raised platform in the back of the bus, barefoot. Earlier, as I’d attempted to haul myself and heavy backpack up onto the padded platform to snag the last available space, the ticket manager of the new bus had rushed toward me, indicating in frantic Vietnamese and hand motions that I must remove my sandals before sitting. Looking down I noticed a mound of rubber sandals forming at the end of the aisle. My own soggy pair joined the jumble.

From my vantage point at the rear of the chilly, squeaky vehicle, I surmise I am the only foreigner; traditionally-dressed as well as Western-wardrobed Vietnamese women, men, children and babies chatter on cellphones or snooze in every seat. I doubt there is anyone I can ask if I’m going the right way, so I sit back, fish my towel from my bag to wrap around my cold wet feet, pull my sweatshirt hoodie tighter and try to relax and enjoy the next three hours.

Sometime later, I raise my head from a light slumber when the bus pulls into a rural gas station. The ticket manager reports something loudly, probably how much time we have to use the toilet or buy food if we desire, and a few people exit. Having skipped breakfast in order to make the bus on time, I’m utterly ravenous and could definitely use the facilities, but I don’t dare leave without understanding the time limit.

To my (partial) relief, a couple of ladies wearing gloves, conical palm leaf non la hats and gauze masks over their faces come aboard bearing trays of food to sell to hungry riders. When the first makes her way close enough to the back that I can clearly see her wares, I deflate. It’s some sort of unidentifiable fruit; sliced, washed and hand-packaged in clear plastic baggies. If I eat it, I risk getting sick from contaminated water. 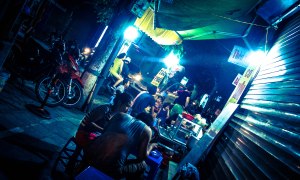 Locals eat dinner at small cafes in a Hanoi alleyway

The second lady is selling the equivalent of Dunkin’ Donuts donut holes; bumpy spheres of fried dough rolled in sugar. I reason that those have been thoroughly drowned in hot oil and are probably ok to eat, so I buy a bag and take a few hesitant bites of the sweet grease bombs. They thud heavily in my stomach. I close up the bag, suddenly feeling a little nauseous.

The rest of the ride is spent yo-yoing between forgetting about my unhappy stomach, and keenly remembering it, as the scenery whipping past the windows tugs at my curiosity. We pass farmland; grazing water buffalo, hunched locals harvesting rice from watery paddies, and sagging shacks of salvaged wood, corrugated roofs and plastic tarps.

At last, the bus manager shouts, “Halong!” and we lurch to a stop next to a muddy lot featuring a single roadside fruit stand where a local sits looking bored. Two taxis and a motorbike taxi have gathered. I’m still struggling to shove my wet sandals onto my feet when the bus begins to move again, throwing me off balance. “Wait!” I cry, “Halong! Halong!” and I ungracefully plow my way up the aisle with my bulky bag; my left sandal is not quite fastened and flaps loudly with each step. The bus halts abruptly again to let me off.

I glance around. I am certainly not at a bus station of any kind, and I cannot even see Halong Bay from here. I look warily at the taxi driver wolves approaching me like a meal ticket, knowing that I will have to trust one of them to get me to my hotel in town, and hoping I don’t get ripped off too badly.

I arrive at my (thankfully quiet and clean) hilltop hotel and get my first good look at Halong Bay. Through the persistent rain, lightning intermittently bullwhips the sky, and thunder growls grimly. I have only three days here — I pray that one of them will offer weather agreeable enough for a boat excursion of the Bay to make the long, uncomfortable journey here worthwhile.

The third day turns out to be the charm.

I’m greeted by warm blue skies as I slurp down a hearty breakfast of noodles and broth before the shuttle to the Halong piers arrives.

“Ha Long” translates to “descending dragon” — a name coined in 1898 after a French naval lieutenant called Lagoredin and his crew sighted dragon-like (according to Lagoredin) giant sea snakes slipping through the water on several occasions. The legends told of Halong Bay go back much further than the French occupation, and involve a healthy mix of dragon stories as well. The one I like best pins the formation of the towering rock monoliths on a great sea dragon that whipped its way through the bay so violently that its tail sliced up the land and scattered the islands.

A UNESCO World Heritage Site, the remarkable geology of Halong Bay is something to behold. The history of its 2,000+ lofty limestone islands starts all the way back in the pre-Cambrian period when the shells, skeletons and exoskeletons of organisms piled up on the bed of an ancient sea, to eventually be whittled away, creating the magnificent karstic formations that I’ve come here to see.

As it turns out, they are absolutely worth the trip.

The dragon-headed bow of the large tour boat I’m on charges across the bay toward the jagged mounds that stretch across the horizon like rows of dragon teeth of legend.

On the boat I am the only English speaker among one Japanese and six Chinese tourists, so there’s no use in trying to make any tour buddies. Instead, I climb the steep stairs to the top deck of the mostly empty boat and position myself at the front to capture images of the islands as they grow larger and larger before us.

We make first landfall at the Cave of the Dragon, the translation of the local name, Thien Cung. Single file, we exit our vessel and climb steep wooden stairs to the mouth of the grotto, which quickly opens up into a massive cavern.

I am a major fan of caves (if you’ve been reading this blog since the beginning, you might have noticed). These caves should bring my inner geek to euphoria… but it doesn’t. At all. The place is lit up like a Christmas tree with hokey colored circus spotlights. I try to get excited about the beauty of the rock formations, try to appreciate the millions upon millions of years it took for what I’m seeing to materialize. But I can only roll my eyes at the theatrics.

Once we’re all back on the boat, we’re off, slaloming through the labyrinth of rocky spires. The day has gotten scalding hot and humid from the tropical storms of the past half week and I don’t notice that my sweating skin is starting to turn rosy beneath harsh rays while I snap photos from the upper deck.

We approach a cove where a floating fishing village-slash-tourist-attraction clusters near sheer cliffs. Most of the fishermen lay slumped inside their boats, sleeping through the worst of the day’s heat, though some busy themselves with chores like laundry and attempting to catch their next meal.

We each shell out $100,000 Vietnamese dong (roughly $4.50 USD) to take a ride in waiting bamboo boats to see the area close up. The boats slowly paddle through a watery rock tunnel, Indochine Cave, and emerge into a tropical lagoon lined with lush green ferns and vines that scale straight up the walls toward the sky above.

Next the boat pilot paddles us steadily toward a second lagoon, it’s just as alluring as the first. However, this one features a narrow space in the mountainous rock to allow for a careful, practiced exit, slipping over visible submerged boulders. We emerge safely and make our way back to the floating village past undulating, wave-worn limestone that reminds me a little of high-art sculptures I’ve seen in museums.

Eventually the sun starts to descend into the Halong Bay, soon to disappear like the dragons of its namesake. Our dragon-bowed boat chugs back to the pier; the islands like raw jade stones become smaller and smaller in the deepening light.

The following morning I pack my bags once again and board a van along with seven other English-speaking travelers. We’re all headed back to chaotic Hanoi — this time I can be certain I’m in the right place. I relax in my seat, open a package of Oreos (always a safe bet), and munch contentedly as the scenery from three days ago flies by again, now in reverse order.

Somehow this feels almost too easy. I tell myself to just enjoy the ride.

Next stop: The mountains and rice terraces of Sapa, Vietnam!