Walking with Lions in Zimbabwe

It was still dark outside.

Drowsy, our eyes struggling to adjust to the dimness, Michelle and I emerged from our hut at the Stanley & Livingstone Reserve Lodge in Victoria Falls, Zimbabwe and made our way down the path toward the main house for our scheduled 6am breakfast. Some 40 yards away, we heard baboons calling in the blackness, and rustling about in the shadowy trees of the private game reserve. Electrified wires supplemented a steep 10-foot dropped wall that separated the reserve with its large watering hole (which drew everything from zebras to impalas to drink) from the manicured lawns that lined the stone walkways of this modest complex. Though the wall and wire didn’t stop boisterous baboons from swinging over it through the trees on hot days to indulge in a dip in the guest swimming pool.

The resident chef greeted us with his usual chipper attitude, despite the early hour. “Good morning ladies! You are excited to see lions today, yes?” to which we sleepily responded in the affirmative while helping ourselves to cereal and toast. Chef poured us steaming coffee and added the exact amounts of sugar and cream that we each liked, which he had memorized on the morning we arrived, three days ago.

At exactly 6:30, our bellies satiated with more than enough, we piled into the van that would take us to the lion reserve where, according to the hotel’s list of possible tourist activities, we would be “walking with lions.”

I had no clue what that entailed, but I’d be finding out in approximately one hour. Until then: car cat nap.

I awoke to early morning light; diluted gold streaming softly through trees. Gravel crunched as we pulled up to an airy wood planked office building with an attached overhang shading a number of benches. A group of 10 or so tourists had already assembled and were digging into a prepared breakfast of eggs, french toast and bacon. “Good thing we ate already,” Michelle chuckled as we sat down to join and get the scoop on what we’d be doing on the tour.

The guides proceeded to give us the overview. The two lions we’d be walking with were cubs. Sadly, they’d been rescued after their mother had been poached, and they’d been hand-reared at this private reserve to be ‘animal ambassadors’ while they were young. When they get too big for this (i.e. too dangerous), they’d be transferred to a very large protected reserve where they’d have a quality, normal adult live, without the risk of poachers.

Each day for the past two months, they’d been lead back and forth along the path we’d be walking. So they were now familiar with the route and understood the routine of: get to the end, hang out for a bit, and then come back.

BUT they are still wild animals—the guides emphasized—and they are not sedated. So there were rules everyone needed to follow for safety.

Rule #1: Always carry a big stick. We were each supplied with a straight, narrow 4-foot long tree branch; the perfect walking stick, which we were not to put down at any time.

Rule #2: Walk behind the lions’ shoulders. If they stop, you stop. If they go, you go. As they’re walking, you can pet their backs and that’s it. Do not go near their heads (for obvious reasons). If the lion turns its head to look back at you, you put your stick in front of you, between yourself and the lion.

Rule #3: Do not crouch or look the lion directly in the eyes. That is perceived as threatening—and you don’t want that.

“Everyone understand the rules?” YES! The enthusiastic reply, as the excitement and coffee had kicked in all around.

And then we were off!

About a fifty yards up the trail, the two cubs came into view. They were peacefully lounging in the sun; their handler had paused them several yards away, waiting for us. There were gasps of amazement when we saw them—it was like something out of National Geographic. They were beautiful, and adorable, and—to me—just a teensy bit terrifying.

As we approached, their handler spoke to them and started down the path, and they obligingly rose to their huge, paddle-like teenager feet and followed. One by one, each person in our group walked quickly and quietly to catch up to the lions and with thrill and awe, stroked the lions’ backs as they ambled along. For each person, one of the guides, or another group member snapped a flurry of photos with big digital cameras, little point-and-shoots, and smartphones.

I felt an inherent unease pinch my stomach. My throat felt dry. I nervously encouraged everyone else to go accompany the lions while I stayed toward the rear of the pack. Something about this seemed…wrong. Idiotic. Like walking right up to a very large predator with very large teeth and claws.

Which, clearly, is what they were!

No one else seemed afraid. As if it were merely a couple of friendly labradors they were patting. Like they were getting their picture taken with Mickey Mouse at Disneyland. It all added to my angst. 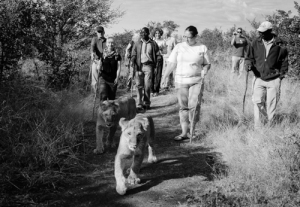 I (black shirt on the left) am smiling in this photo, but don’t let that fool you. I was pretty scared!

At last I was goaded into stepping forward and having my turn. Michelle went first and pet the back of one of the lions awkwardly as it strode along. I power-walked to catch up, but admittedly, I didn’t quite switch to “full power mode” (deliberately), and kind of lagged a few steps behind them (in my defense, lions are surprisingly quick, even when strolling casually).

Finally I was near enough to reach down and lightly brush the tips of my fingers over one lion’s back. The fur was soft and thick, like the coat of a German Shepard.

Holy shit, I thought, I just pet a lion!

Having accomplished what I came to do, I immediately fell back into the group. I was relieved, but also sort of instantly dazzled by the incredible beasts. And there was more to come.

The end of the trail opened up to a shallow, stoney river, which twinkled midmorning light. The lions meandered for a bit as our group stalked them slowly from a short distance. After a few minutes they settled themselves near a large rock. In a calm voice, our guide told us that as long as they stay there, we can, one at a time, go wide around them and come up from behind, near the rock, to pet them again.

Again, I didn’t volunteer to go first. But I also didn’t wait to go last this time. I was gaining some confidence, at least. It felt like sneaking up on an unsuspecting friend to shout “Boo!”—only in this case, I was praying to not startle them. I creeped close enough to stroke them both this time. And again, a flicker of complete awe pushed through the wariness. It was actually unbelievable and awesome. I grinned helplessly, and this time it was an unforced, un-camera-conscious smile.

Shortly after my turn was over, the lions decided they were done sitting and headed toward the water to play. Our group, now bonded over this shared amazing experience with the beautiful cats, watched them from the shore. 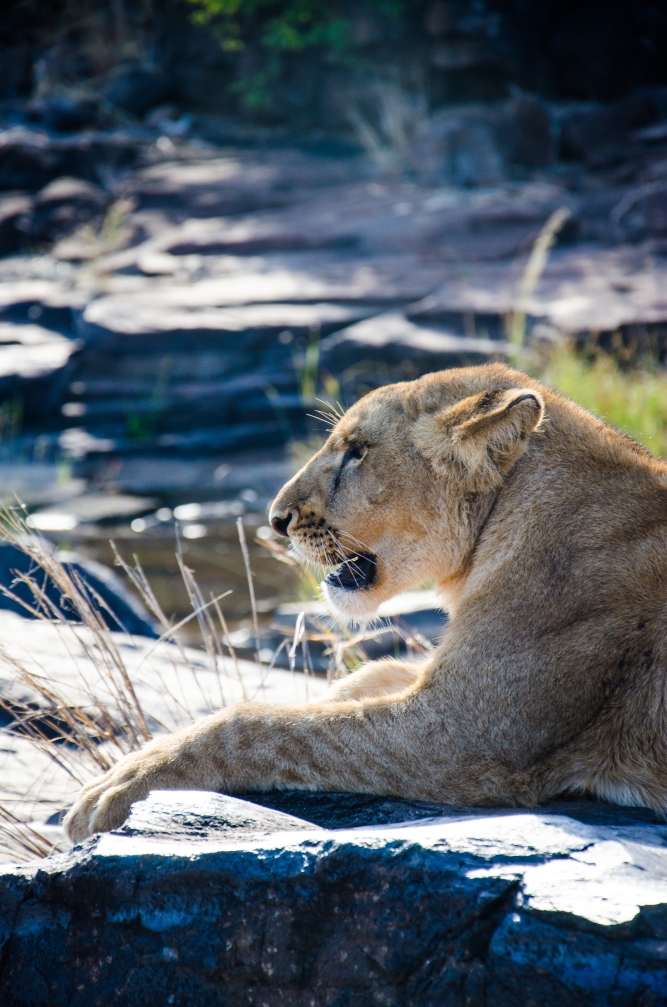 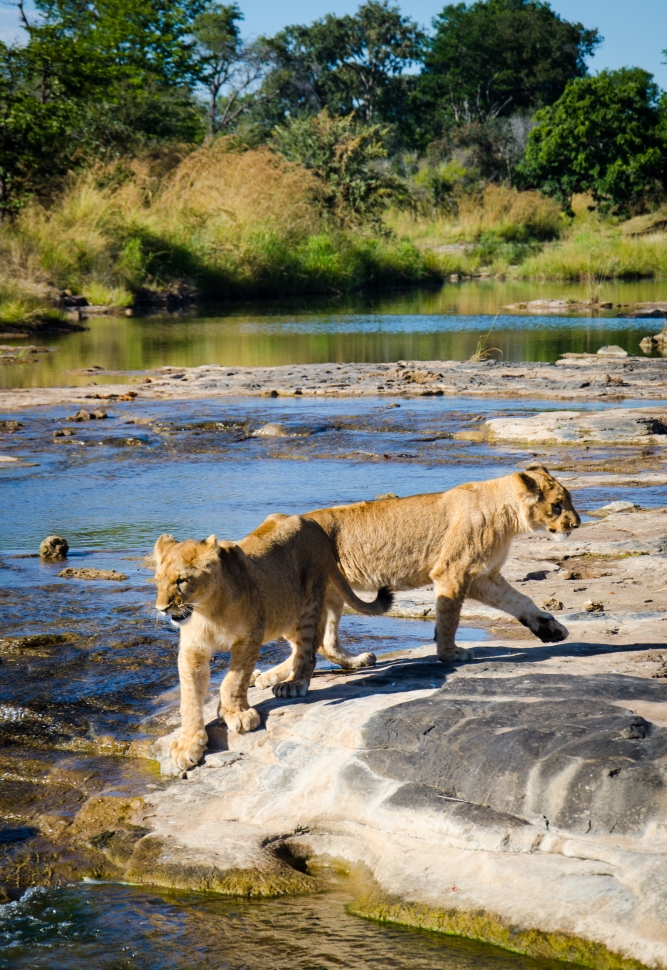 Eventually it came time to go, and the two leaped across the rocks, and padded back down the path with our group, as ever, in unhurried pursuit. We were all laughing and talking together, high on a cocktail of adrenaline and wonderment. I was proud of myself for moving past my fear and not shying away from this rare and unthinkable opportunity.

Cool midmorning sun was rapidly turning into midday heat rays as we crunched gravel and left the reserve and young cats behind to return to our lodge; the redolent scent of soft lion fur still lingering on our fingers.

*Have you ever had a chance to pet a big cat (as in, not a house cat)?