The Time I Rode an Elephant in Thailand

“Here is your ride for the elephant trek.” murmured the girl at the front desk of our hotel on Patong Beach in Phuket, Thailand. This was April of 2013. Katie, Kim and I followed her pointing finger to the hectic roadside where a battered grey truck was parking near the driveway entrance. It featured an attached tent that sheltered from the oppressive sun two narrow wooden benches fastened to the interior walls of the truck bed.

One after another, we trudged over and hefted ourselves into the back of the truck. Silent, as our energy had been pretty well sapped by the heat, as well as by the trials of a week and a half spent constantly in each other’s company. I attempted to raise group enthusiasm for what we were about to do: “You guys, we’re finally gonna ride elephants! I’m so excited!” which was met by fleeting weary smiles. Kim put her earbuds in and retreated into her jams. I quickly gave up.

It was the last full day of our Thailand trip, a trip that I had looked forward to for so many reasons, but above all, the number one experience I wanted from this adventure was to ride an elephant. After a few extra stops to pick up fellow tourists, we pulled into the drive of the elephant trek company. Mangey clucking chickens flapped out of the way. Barefoot children in dirty clothes lingered near a small, poorly constructed cinderblock building. And then I saw the elephants. And I deflated.

They looked like prisoners. Their feet were chained and secured to hamper anything other than minor movements. They huddled as best they could under the shade of raggedy swaths of fabric, strung from the trees. And they looked hot and spent beneath mountainous padding strapped to their backs, upon which were perched special elephant-riding loveseats. Perturbed, I thought about our conversation earlier in the day with the hotel’s soft-spoken concierge girl who had booked us on this trek. We’d asked her to please only send us to a company that took good care of its elephants. We’d heard awful stories about some elephant trek companies abusing their elephants. I knew I couldn’t handle seeing something like that—was that what I was seeing now? The scene was definitely not what I had expected, though I suppose I didn’t exactly know for sure what I did expect. But it wasn’t this. I was hesitant but decided to go with the flow. The three of us were rounded up and instructed to remove our shoes and climb to a high platform from which we’d somehow gingerly seat ourselves.

My two friends boarded the first elephant, which ambled off toward a grassy trail on the instructing barks from it’s young, 20-something Thai guide. I stepped onto the second, which was guided by a small, weathered, middle-aged man who scrambled on up to straddle the elephant’s neck with a boost from the pachyderm’s knee and ear. From my position atop the loveseat, I felt like I was extremely high up, slightly uncomfortably so, given my wariness of heights.

With a fairly alarming lurching motion, we turned and plodded lethargically after the first elephant. I held on with white knuckles, sliding side to side a little with each lumbering step. I hoped the flimsy twine used as a seatbelt was enough to keep me in place should the animal trip on the surprising number of boulders along the trail. After a few minutes I acclimated to the elephant’s jarring gait and started to relax some and enjoy the experience.

I’m riding an elephant! I thought, repeating the statement mentally with growing amazement. I felt relaxed enough to loosen my death grip on the loveseat armrests and try to fish my camera out of my messenger bag. But with the abrupt rocking, the otherwise simple task was made much more difficult.

And suddenly I dropped the bag with my camera inside!

It plummeted to the ground, some 12 feet below. Shit!  Before I had a chance to even imagine what I was going to do about this, the elephant stopped dead in its tracks and the guide spoke something to him. “I’m so sorry!” I blathered, “Don’t worry about it—I’ll just, uh, get it later, afterwards, uh…”

Then, incredibly, the elephant reached down with its trunk and plucked my bag from the grass by the shoulder strap.

My bag was passed over the elephant’s head, ever so carefully and delicately, and fully back to where I sat on the seat. It was released only when I had it securely in my hands. If the ground hadn’t been so far down, my jaw would have hit it solidly. I was utterly amazed by what had just happened. I thanked the guide AND the elephant both, profusely, despite the fact that neither understood a word of it. The man patted the elephant and we walked on as if nothing had happened.

It was official. This was the world’s best elephant. My heart bloomed with awe and warmth for it, in all its grey colossal benevolence.

At the top of a wooded hill, we stopped in the welcoming shade. Through the trees, the site allowed us a stunning view of the Andaman Sea, a brilliant blue jewel rimmed by Phuket’s picturesque shoreline. As we sat quietly, relaxing and taking in the scenery, my guide began to absent-mindedly groom the elephant’s head and ears.

It was a surprisingly tender and caring gesture.

I was starting to get the impression that this man really cared—maybe a great deal—about this elephant. It seemed as if they had a rapport, even a mutual trust. I was reminded of the bond between my old horse and I when I was growing up riding on our farm. There was a trust that neither would ever let anything happen to the other. We’d always take care of each other.

It occurred to me that perhaps these were not abused elephants, as I had initially considered. They didn’t seem sick or anything, technically. Maybe they were being cared for as well as could be afforded? I hoped so. After a bit, the guide told us that it was too hot for the elephants to continue through the full trail today and we needed to go back.

Though I had totally fallen in love with my amazing elephant, I understood completely and was ok with the decision (and honestly, an end to the rocky swaying walk would not exactly be a terrible thing). Also, my friends appeared relieved to escape the apparently pushy flirtations of the young guy who was their guide.

Before we left the overlook, my guide motioned for me to pass him my camera to take a photo. He expertly slid down and encouraged me to move to his spot at the elephant’s neck. I did as he directed, feeling the wiry hairs of his head, and thick, warm skin beneath my bare feet as I carefully maneuvered forward. 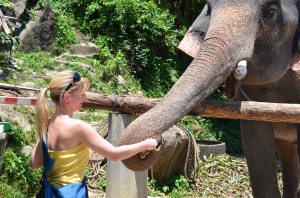 At the end of the trek, I noticed a sign that said you could feed the elephants bananas for about 50 cents. It was the only way I knew to thank my elephant for saving my bag, and ending my trip to beautiful Thailand with a magical experience that—given what they say about the memories of elephants—we’d both remember for a long while.

*Have you ever ridden a huge animal like an elephant or a camel?