Going Out with a Bang in India

A sailing whistle culminates in a blast that seems to rattle the stale, oven-hot air above Varanasi’s battered skyline. I glance up at the milky, peach-tinged early evening haze, but it’s too late — I can’t spot the firecracker.

All around, rooftop terraces clatter with scattering macaque monkeys and unseen armies of exuberant boys bearing myriad varieties of crackers. They’re getting an early start on today’s celebratory pyrotechnics — it happens to be Narak Chaturdasi, the second day of Diwali, the Hindu holy festival of lights.

Having arrived just over an hour ago in Varnasi from Delhi, my friend Rachel and I are out for a quick spin around our new 3,000-year old neighborhood. Single file, we hang random turns, scurrying through fissure-like alleys that assail our senses with every step. 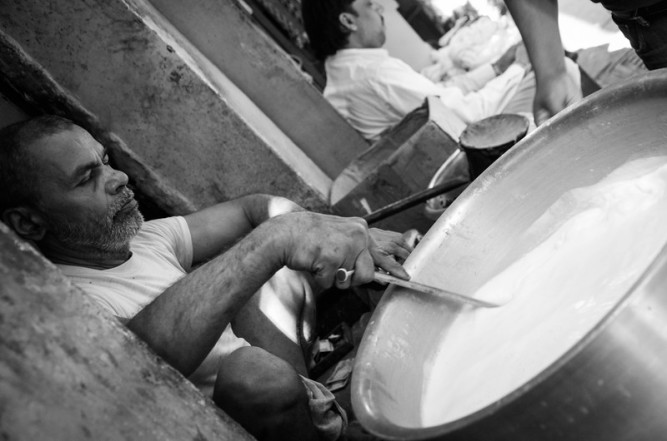 Occasionally, we must gingery shuffle around the sacred sources of the latter.

Soon, the slim corridor broadens and we find ourselves at the top of a ghat, a stone stairway that leads down to the west bank of the Ganges River. A strange heaviness burdens the oxygen here. From our vantage point, we spy several bonfires, spirals of smoke, and a crowd of Indians flanked by a small, quiet audience of foreign travelers.

An uneasy scent pricks something deep in my mind. It causes the hairs on my arms to stand on end.

This must be it, I think, the Hindu holy place where they cremate the dead.

It’s why we’d come to Varanasi. I’m struck with a mix of curiosity and reverence — as well as an acute feeling that I am intruding. I push that aside as we descend the stairs, which have been made slippery from innumerable years of daily use combined with a thin, foul layer of muck.

Weaving around gathered onlookers, we join the foreigners and pick out a fairly dry spot to sit, next to a massive stack of person-length wood logs. 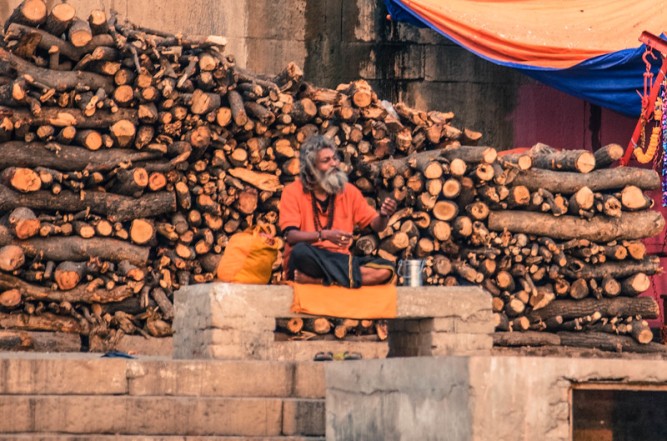 A bundle of the same sort of logs are aflame atop a large cement platform between the stairs and water. Men – funeral workers – stand nearby, poking and arranging the logs as they smolder with long metal rods. A boy scoops handfuls of a substance that looks like sand from a white plastic bag and sprinkles it at the blaze.

It is several minutes before my brain registers the shape of two human feet protruding from one end of the smoking heap. They’re pale, smothered with ash, but I can still make out the streak of ochre-red color that has been painted across them.

On the lowest steps of the ghat, I witness another body, wrapped in gold silks and secured to a wooden stretcher, being dipped into the Ganges for purification before heading into that final heat.

At our backs, pops and sizzles of firecrackers are now regularly pelting the twilight with joyous bursts of light. In an unsettling juxtaposition, they mirror the glowing flames of the half dozen pyres before us.

My original fascination begins to recede, clouded by the inherent sadness of this outwardly hellish site.

The next morning at 6am, Rachel and I again descend the slick steps (called Manikarnika Ghat, we’ve learned). It’s still dark out, though the eastern horizon is beginning to illuminate. Suraj, the 20-something young man who runs the hostel we’re staying at, is leading us toward a congregation of docked row boats for a sunrise Ganges tour.

At the water’s edge, Suraj leaps aboard one of the boats, calling out to rouse Mehran, our rower, who is sound asleep in his vessel. As he does this, I hesitantly glance back at this morning’s batch of bonfires, smoldering simultaneously, tended to by a few tired-looking men.

Around 300 cremations take place here every day, Suraj had told us the previous evening. Varanasi is the holiest of seven funeral sites throughout India, and Manikarnika Ghat is the most revered and sought after of 12 cremation ghats in the city. People pay a lot of money to be cremated here.

Therefore, Suraj explained, it is believed that this ghat offers the likeliest way to reach moksha — liberation from the cycle of reincarnation.

Half awake, Mehran labors at the oars and we glide at an unhurried pace up river from the bonfires. Diffuse daylight pushes through the smog that hangs perennially over the Ganga (as it’s called in India), bringing a serene glow to the charming and colorful temples and crumbling homes lining the shore. The scent of incense lingers, from offerings floating by in shallow clay trays.

Devout Hindus have already started to assemble on the ghats to perform rituals of cleansing — for both soul and body. 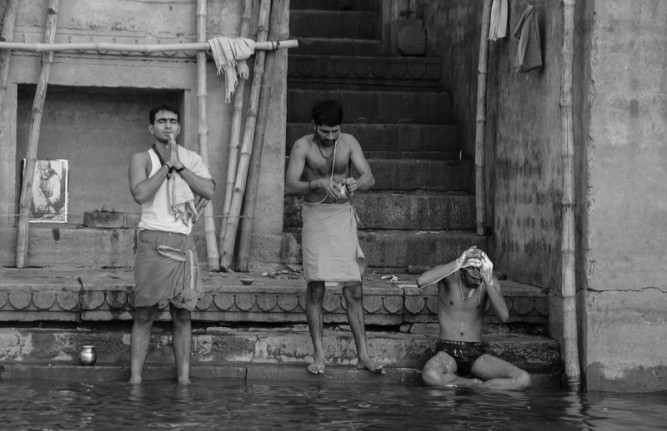 Mehran, who has scarcely spoken a word so far, asks us suddenly, “You like chai tea?”

We say sure, though since we’re in the middle of the Ganges, we have no idea how he plans on conjuring the tasty drink, a specialty of northern India. He paddles up to a crowded ghat and lets out a shrill whistle and waves at an old man standing on the bottom ghat step holding a silver tea kettle.

The man, with wild grey hair and matching beard, wearing a simple white lungi wrapped around his thin hips and thighs, scampers deftly across several boats to reach ours. He asks how many we want. 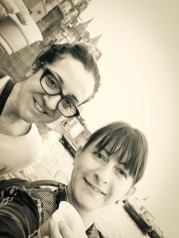 It’s only twenty cents apiece, so Rachel requests four — one each for us, and one each for Mehran and the old man, who appears surprised by the offer but gladly accepts it.

Mini plastic cups of steaming chai are passed around. Mehran and the old man smile and bow their heads in thanks, and we return the gesture.

The fragrant tea is comforting and warm in my hands, sweet on my tongue. Involuntarily, I sigh, and allow myself a long moment of quiet. Despite the bustling surroundings, I savor the milky liquid as well as this moment of early morning radiance on the holiest of rivers for as long as I can.

Finally, we do a u-turn and make our way gradually back to Manikarnika Ghat. 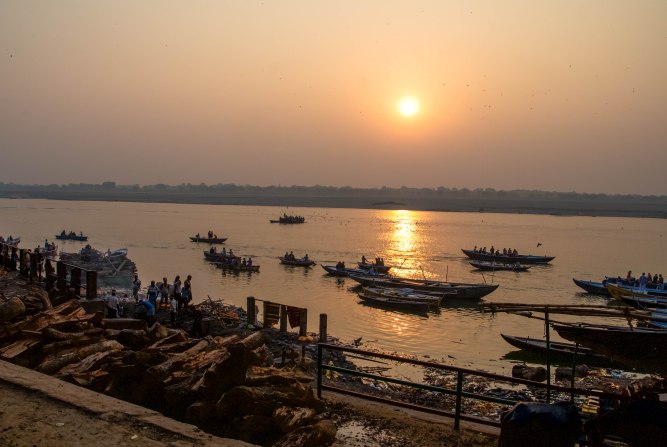 The stacks of human-sized logs loom on shore like mini fortresses, but oddly, they don’t seem quite as ominous as they had yesterday. Something about my understanding what is happening and why it’s happening here has disarmed me. This ceremonial farewell to human bodies, and the lives they had lived seems beautiful. Noble.

In the docking area, one of the boats has been draped with a ring of marigolds, a favorite Diwali decoration. I consider what I’ve come to love about this exultant holiday. Its message is about celebrating the victory of light over darkness. Hope over despair. Knowledge over ignorance.

Tonight is our last night in Varanasi — I find myself looking forward to our final experience of mad, chaotic explosions of sound and brilliance in this city of light.

Because why not, if at all possible, go out with a bang?

Next up: More stories and photos from my unforgettable adventures in India!