It’s the 4th of July and I’m sitting on the bed—make that beds, two twin beds have been pushed together and dressed with a single sheet—in my hotel room in Perissa on the Island of Santorini. Off the room, past pretty french doors, there is a small balcony of stucco painted white and classic Santorini blue. A coffee colored metal bistro table and matching chairs are set up, creating an unobstructed overview of the bean-shaped outdoor swimming pool at the hotel next door, which draws sunburned retirees to snooze in lounge chairs at any time of day. I’ve only sat out there twice in the four days I’ve been here, but it’s nice knowing I have the option, when I want to, of stepping outside my Grecian sun-warmed room to cool off in winds whipping up from the Aegean Sea on the southeast side of the island.

Instead of thinking about barbecues and fireworks as I have done on just about every other 4th of July throughout my entire life—I’m thinking about jail.

For the longest time, I don’t recall how long exactly, but probably since I was a teenager, I’ve had a fantasy of going to jail. In my fantasy, I haven’t done anything wrong to be sent to jail, it’s more like I have been permitted to hang out in jail. In my imaginary cell, there is a nice comfy cot with a soft patchwork blanket, and a wooden desk and chair that face a window (no bars needed, I’m not going anywhere) that looks out onto lovely rolling hills of trees and sunshine. I also have a computer in my jail cell, with which I can—and indeed MUST, since I’m in jail and there is nothing else to do—write whatever I want all day, every day, to my little heart’s content. 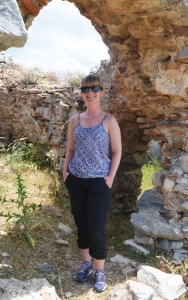 My life in beautiful ruins – Turkey

Why jail? Because surely there could be no other way in my pre-retirement life of ever having enough uninterrupted time to do what I love: to write, to practice, to get better. And though I’ve always felt grateful to be able to write for a living…writing marketing copy for 40 hours a week doesn’t quite lend itself to coming home and writing more, at least not with any sort of fresh creative energy.

But for the two weeks that I’ve now been in Greece (and have been traveling alone), I’ve spent most of my time hunkered down inside my various hotels and AIrbnbs writing a variety of articles, some for my blog and some for other things, and it has been glorious. I feel more creative than ever. And I feel utterly free (granted, with a healthy dose of guilt that reminds me to exit my cave every so often and go sightseeing). It’s like my jail fantasy—but better.

My travels in the month of June have taken me to (technically) three continents: Egypt in Africa, Turkey in Europe/Asia (Istanbul is partially in Asia, so I’m counting that), and Greece in Europe. I’ve now officially been traveling for a quarter of a year!! Crazy. Time has simultaneously dragged and flown.

This month, I’ve decided to do my roundup as a listicle. So without further ado, I give you:

Totally Random Thoughts and Musings on My 3rd Month of Travel

1. I miss the gym. I truly cannot believe that I just wrote that. Let me rephrase: I miss having what little shred of endurance I once had when I was hitting the gym regularly. I climbed a volcano yesterday, and I was more winded than the 70 year old grandmother in the tour group, and that is rather humiliating. I have occasional passing thoughts of getting up early and jogging, but those thoughts keep on passing straight on through with the snooze button on my alarm. Anyway, I’d probably get lost, and that’s no good, either.

2. I’m MOSTLY not afraid of heights anymore. In Cappadocia, Turkey my friend Rudy and I took a hot air balloon ride over the incredible Rose Valley at sunrise. It was stunningly beautiful… and slightly terrifying when at one point the pilot torpedoed upward, higher than I’d ever been except in an airplane. Somehow, looking out the window of an airplane is not so scary, but on the other hand, it did used to scare the crap out of me. So, I call this progress!

3. I love, love, love warm beaches. I realize this sounds incredibly obvious. But for a girl who has lived in San Francisco for eight years where it’s never warm enough to go in the water, much less enjoy the sun; and who also has never really taken a proper beach vacation because she was always too busy trying to cram in as much sightseeing and culture as humanly possible into 10 days—relaxing on a beach is a fairly novel concept. Granted, I don’t go to the beach all that often simply because I feel like I should be doing something productive, but when I do, it is so calming. I totally get why people do ‘beach vacations’ now.

Turkey, I learned during a road trip down the western coastline, has some of the best beaches I’ve ever seen. And don’t even get me started on Greece. Side note: Somebody needs to invent a way to easily apply sunscreen to your back when you’re traveling solo—million dollar business idea, I’m tellin’ ya—somebody get on it! 😉 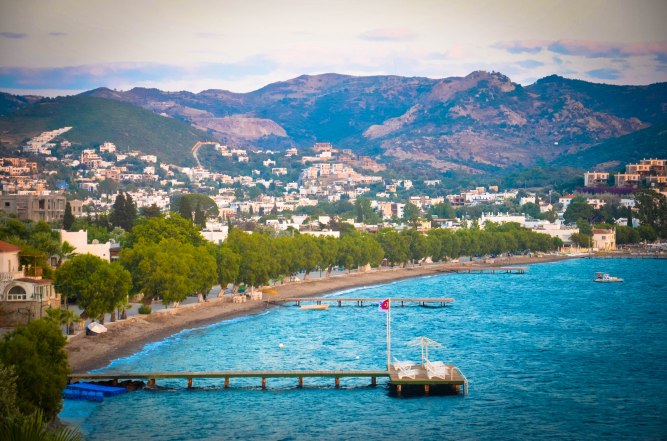 4. Driving a car in a foreign country is not as scary as I thought. When Rudy suggested we rent a car and drive down the coast of Turkey, I told him flat-out no way, uh-uh, not happening. At the time, I had just experienced the ‘joys’ of riding in taxis through the mountains of Morocco, which consisted of crumbling roads, hairpin turns and the craziest drivers I had ever witnessed. I was also in the midst of traveling in Cairo, Egypt with its titanic traffic jams, lack of street signs and stressful everything. So, I was absolutely certain that if we tried to drive in Turkey, it would be the last thing we ever did.

Boy was I wrong. The roads in Turkey were in surprisingly good condition, road signs were pretty clear, and though it took me a little time to get used to the regular practice of overtaking tractors, or being constantly overtaken on mountain roads, it was fine, and Rudy was an excellent navigator. As a bonus—me driving meant I could pull over to take pictures any time I felt like it! 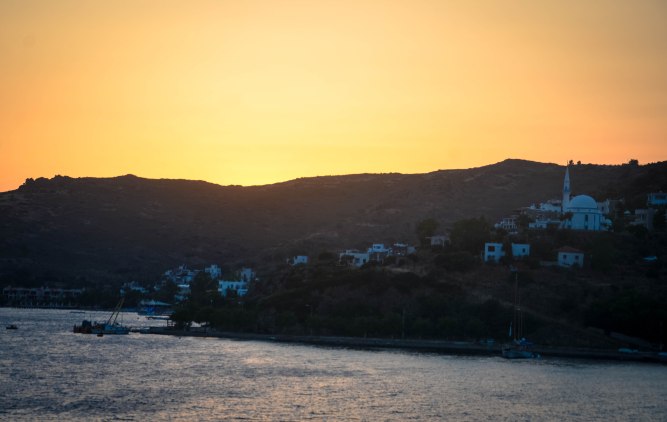 5. Big city beauty standards mean nothing to me now. This is one of THE. BEST. ‘hallelujah’ epiphanies I’ve had during my entire trip so far. I do not give a damn about looking cute. I haven’t touched my makeup in over a month, and I’ve thrown most of it out. I wear my hair back every day because it’s comfortable. I lost two tops to a laundry miix-up in Tangier, so now I’m down to 4 tops and 4 pants/shorts and that’s fine by me; fashion is irrelevant.

When I occasionally hear women around me complain about being fat or ugly (99% of the time they are actually quite thin and gorgeous, and 99% of the time they are American), it used to sting and make me feel bad about the bit of weight that I’ve put on. But now it just sounds so vapid and foreign and nonsensical. Who cares? I think, You’re perfectly healthy. Why don’t you try thinking about something that actually matters? Obsessing about one’s appearance sounds like the absolute worst use of time to me now, it’s such an utter downer. Most of the world, I’m realizing, doesn’t obsess like American women do—particularly in San Francisco and other big cities. We make ourselves feel SO terrible for not looking like Gisele Bündchen, and that necessarily means that we won’t be able to thoroughly love ourselves, and that is depressing. Being almost completely free from all of that nonsense for the past three months has been incredibly refreshing and good for my own happiness and self love, and I wish I could impart this feeling to anyone who needs it, like I needed it for so long. The concept that I feel I’ve picked up on this subject, to try and put it into a few words for other women, is: Do what makes you happy and healthy in your body and mind, adhere to your own expectations, and try hard to shut out the never-ending onslaught of beauty standard noise. You are enough. I know this is easier said than done, but I do feel it’s worth saying.

6. There’s never enough time! This statement sounds completely ridiculous coming from somebody who is essentially on one big vacation for a year, but I swear it’s true. When I’m traveling with friends, I’m more or less constantly in motion—I understand that they want to squeeze every second out of their limited holiday time, because that’s what I’ve always done. But it’s hard to carve out the time I need to write during those times. Now that I’m traveling on my own for a month and a half until I meet up with friends in London, I still feel like there’s not enough time to do all the writing I want to do (usually putting in 8-12 hours per day when possible), plus keeping up with seeing all the countries I want to get to, and factoring in useless, unproductive travel days.

I know, poor little me, right? On the more positive (less whiney) side, I DO get to write more than I ever have before. And I am amazingly happy and feel so much more comfortable traveling on my own now. I feel I’ve experienced a lot of the things that can go wrong and know how to deal with them now (a major financial crisis in Greece, for example), which gives me a sense of calm, like, it’s cool, I got this.

Independence, this multi-layered newfound freedom I’m experiencing, is a pretty nice feeling for a world-wandering wallflower like me to have. Especially on this barbecue-less, fireworks-less, but altogether spectacular Independence Day. 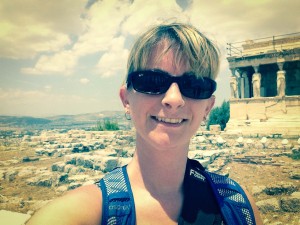 Me, my selfie and I at the Acropolis in Athens