Cuba Part 1: When the Lights Go Out in Havana

“What can you do? It’s Cuba!” my host, Elaine exclaims apologetically in Spanish, leading me by candlelight into a darkened room in the rear of her particular familiar on Trocadero Street, where I’ll be staying.

This will become a familiar phrase during my week in Havana.

The room has no windows, save for wooden slats in the blue door that can be tilted to let in faint illumination from a small inner alcove topped two stories up by a plastic skylight in the roof. Elaine points out the useless light switches and button to turn on the old air conditioning unit stationed over the doorway, should the electrical current be resurrected at some point in the day.

The government is doing construction in the streets, which is why the electricity is currently out all over the neighborhood. “But maybe later the lights will come back on?” my host suggests optimistically before closing the door behind her, blocking the few dim rays of natural light.

Chuckling and sighing with amusement at the situation, I drop my bags on the twin bed and begin to unpack my things by candlelight. 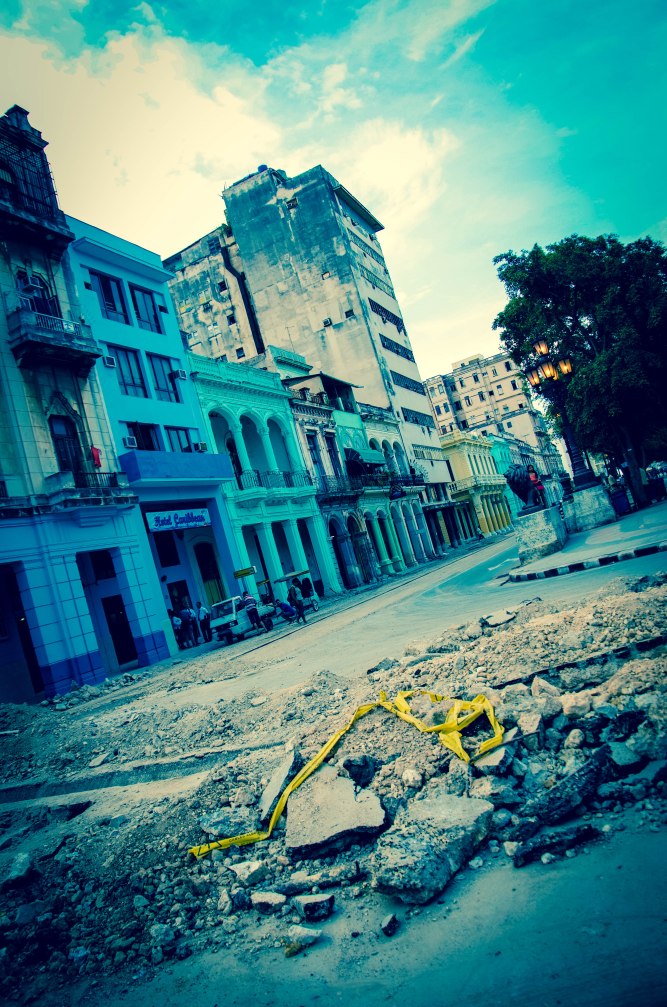 “What is the construction for?” I ask Elaine’s husband Luis the next morning as we walk a gauntlet of gaping holes, fat electrical wires, and heaps of dirt and concrete littering the streets. He’s taking me someplace where I can exchange my American dollars for Cuban CUCs (pronounced “kooks”). 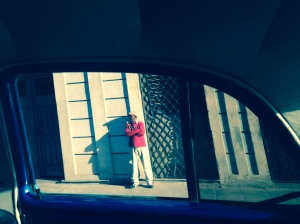 The ride from Havana Airport

I’d been told there are no ATMs that take U.S. debit cards in Havana, except for the one at the airport — which to my horror, was newly broken upon my arrival. When I’d helplessly told a nearby security guard that the machine wasn’t working, he had merely shook his head and shrugged as if to say: What can you do? It’s Cuba!

“The construction is for Obama,” Luis explains. “The government wants the lights to be very bright when he comes.”

I’d read in the news that President Obama was scheduled to visit in about three weeks, to further facilitate the long-awaited and currently underway lifting of the 1960s-era embargo between the U.S. and Cuba.

“All of this is for Obama??” I ask, hopping over a jagged foot-deep trench in the street.

“Eh. Fifty-fifty. Also it is for the people of Havana.” So, it takes a visit by a U.S. president for the Castro regime to finally do something about the spotty electricity? Interesting.

We turn a corner and encounter a massive crowd of people buzzing like flies around an official-looking building. Chaotic queues wind haphazardly down the sidewalk in both directions beneath the sweltering 10 o’clock sun. “Ugh…” I groan apprehensively.

“Don’t worry,” Luis tells me with a sly wink. I follow him as he approaches a man in a green shirt and straw fedora, tapping him on the shoulder. “Hola, amigo.” says the man, looking unsurprised. They’d spoken on the phone earlier about my ‘situation.’

“Come,” Luis motions, and we both trail Green Shirt across the street to a small food market, dodging bicycle taxis and a rainbow of ancient tank-like American-made cars.

Inside the mercado, the air is strangely smoky, as if a coterie of cigar-smoking illegal poker players were concealed somewhere near the back. Glancing around at the sketchy, seemingly aimlessly loitering men here, I imagine this explanation might actually be plausible. I half expect a 1930s Cuban gangster type to step from the shadows and growl, “Your friends are my friends…unless they become unfriendly, comprende?”

Green Shirt and Luis step up to a long glass counter inside the store. Luis pulls my $100 American dollars from a folded manila envelope and places it on the counter. Green Shirt counts the stack and quotes a number to Luis, who shakes his head vigorously, “No, no, no! No, amigo —” and he launches into Spanish too rapid for me to grasp, but I gather he’s fighting for a better exchange rate for me.

Finally, it appears that Luis and Green Shirt have arrived at an agreement; the latter magically produces an enormous folded wad of Cuban dinero from his pocket, counts it, gives it to me. The two men shake hands, then I shake hands with Green Shirt, “Gracias, señor.”

I now have around $95 CUCs to get me through the week. It’s not much. I gulp and prepare for spending almost nothing all week. Day trips, museums, nice dinners, and souvenirs are pretty much out of the question now. “Fabulous,” I mutter as the realization sinks in. I have no one to blame but myself. 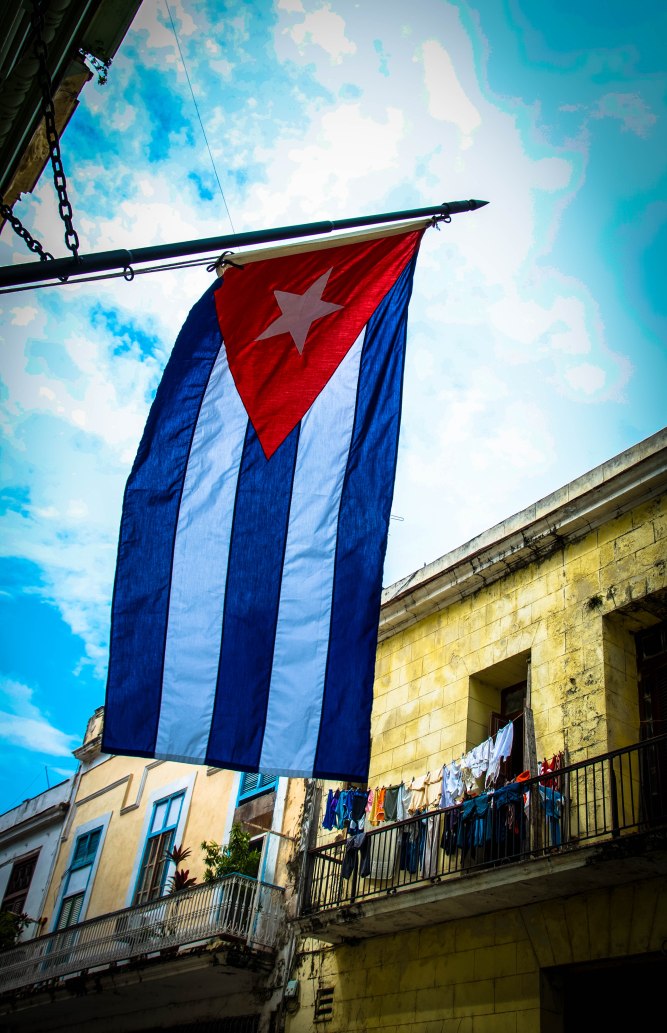 Each morning, my particular familiar in Havana begins with the new normal: a massive breakfast served at a plastic table in the alcove outside my room, prepared by Luis’ cousin Raul. It consists of scrambled eggs, cheese and bologna slices, two buns, crackers, a large plate of fruit, bean soup, freshly blended guava juice, and dense, syrupy Cuban coffee.

I wonder if the government gives them a stipend for this cornucopia — how else could they provide me so much in this country where rations are so tight-fistedly controlled?

Most days I can’t even conceive of finishing it all, and I sneak some of it into plastic baggies to eat later. This is great for my minuscule budget, though I get tired pretty quickly of choking down the same rubbery cold leftovers every afternoon.

On the third morning, there is a rumbling motorized sound outside as I sit patiently plowing through my breakfast. Suddenly, a thick, fog squirts into the house from every crevice on the street side of the home. Elaine darts into the alcove, speaking to me rapidly. It takes a few tries, but finally I get it. The government is fumigating the entire city against mosquitos that could potentially be carrying the Zika Virus, which has been making its way north into the Caribbean from Brazil and Colombia. 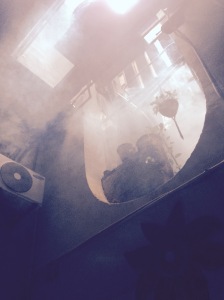 I ask if it’s ok that the fumes seem to be drifting slowly down onto my breakfast. Elaine and Raul both tell me no, no it’s fine… but perhaps I should eat a little faster. I consider whether this, too, is somehow partially for the benefit of Obama.

A moment later, Raul tells me that actually, I need to leave RIGHT NOW because the government is about to fumigate the interior of the house, including my room. Egg sandwich still in hand, I snatch up my things and hoof it outside, hoping that whatever it is they’re spraying won’t be harmful when it has thoroughly coated all my clothing, which is currently piled on a shelf in the room.

What can you do? It’s Cuba! the mantra comes to me automatically now. 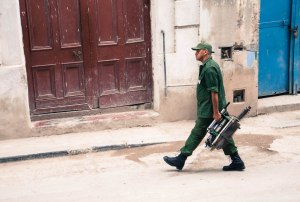 The capital city has become a smoke geyser field. As I wander the Centro Historico, I learn to swivel and walk the other way whenever I hear the telltale rumbling and whooshing of the army-operated fumigation contraptions — which look like props straight out of Ghostbusters to me.

This neighborhood has become my favorite section of Havana; I am willingly charmed by its decrepitude. I marvel at laundry-draped colonial verandas, gothic arches, hints of Greek revival, shreds of curvy woodwork and scrolled metalwork — the structural bones here are impossibly elegant. The place is tattered and torn, but still it radiates vibrantly in a cacophony of color from beneath layers of dust and car exhaust. 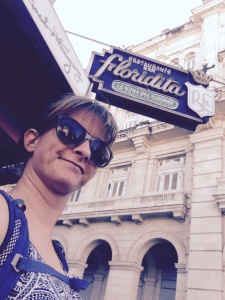 Most mornings, I leave the particular familiar and walk along the park-like Prado in the direction of the Centro Historico, passing sagging homes and grand hotels. I enter Old Havana by hanging a left at the Floridita, Hemmingway’s midcentury haunt (which I stop into one afternoon for an overpriced cocktail at the bar, parking myself near a life size copper statue of ol’ Ernest).

The historical district is at all times a humming hive of sights and sounds.

The big cruise ships pull into the bay daily and unleash hundreds of visitors, mostly from Europe. They flood outward like spilled water through the upscale corridors and plazas for lunch and a spin through the tourist shops offering lovely paintings, bottles of Cuban rum, cigars, and Panama hats.

When I see them undulating toward me like a synchronized flock of fine-feathered birds, I escape by hanging sharp turns into quieter alleys to find what I think of as Real Havana. I hunt with my eyes to greedily soak up views of boldly painted buildings and ancient cars. I open my ears wide to listen for salsa music, discovering it in nooks and crannies.

I scan curiously for intriguing characters — they’re all around, plentiful as stars on a dark country night. Butchers slice and display their fresh wares while produce sellers push their heavy wood carts and call out to the neighbors. Citizens sit and watch the world go by, as I go by and watch them sit. I duck into tiny cafes and pay $2 CUCs to sit by the window and monitor the fascnating stream.

The eventual trickling off of passing government bug-killers reminds me to check the time. It’s getting late, time to head back to the particular familiar. I turn right at the Floridita and retrace my steps along the Prado toward Trocadero Street.

“Kristina, back so early!” Elaine looks surprised, pausing the movie she’s somehow managed to illegally stream to her old computer from the nearly nonexistent internet. I note that the electricity is working — good news.

“Yeah,” I say dumbly, not knowing how to explain (especially in Spanish) that I’m too broke to do much, and with the lack of wifi, I also can’t look up possible entertainment options.

Elaine tsks at the sad state of my social life. “Kristina, te gusta salsa? Musica?” she illustrates by doing a little shuffling salsa move atop her living room rug. I tell her I do in fact like salsa. “Muy bueno! There is a good salsa show tonight at the Casa de Musica. It’s very close to here and cheap to get in. The show starts in an hour, you should go!”

I think for a second, weighing the oppressive boredom that awaits me in my little room, versus the excitement promised by a cheap salsa show. “Ok, yeah! That sounds good!”

Elaine clasps her hands together in joy, “Oh, mi amour, you will have SO much fun!”

When I return to my room to freshen up before heading to the salsa show, it’s still smelly and smoky, giving me an instant headache. I turn on a portable fan to try to coax the fumes out the door.

A moment later, I am alarmed by what sounds like a possessed deck of playing cards flapping and bouncing between my bed and the wall. I glance under the bed and witness a giant cockroach upside down on the floor, legs twitching, wings brutally ripped off during its spastic death throes.

I can only assume this is a side effect of the fumigation.

What can you do? It’s Cuba!

I get directions to the Casa de Musica from Elaine and step outside into the warm early evening air. I peer down in order to avoid the pits and cables of the destructed streets, curious if it will all be finished by the time President Obama arrives in a few weeks’ time.

As dusk gives way to dark, the dial within the city is turning swiftly toward electric — though much of Havana’s electricity still seems to be running on luck alone. I make my way toward the salsa venue, wondering what this night will hold… 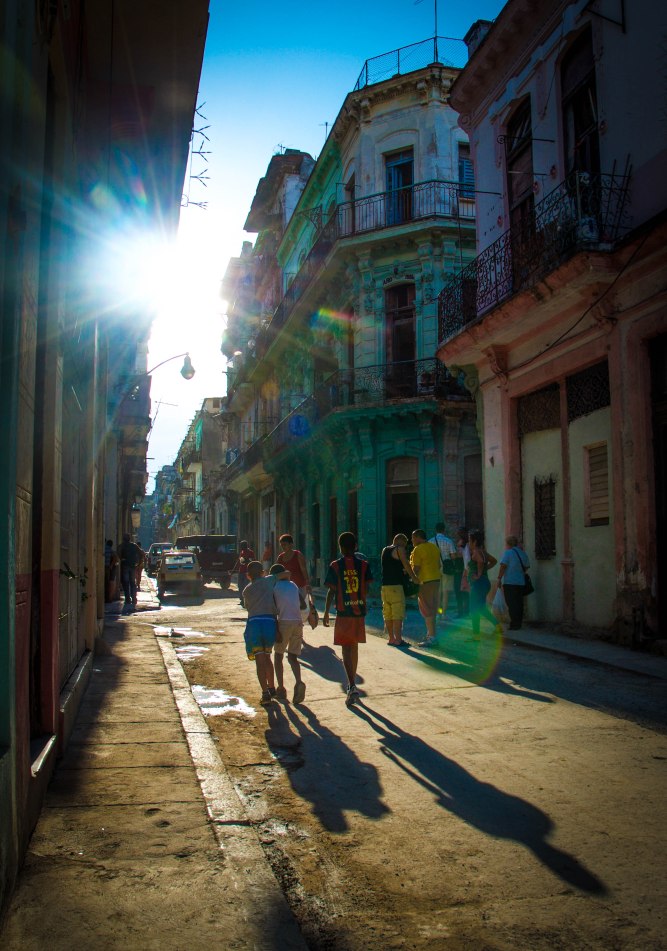 Stay tuned for Part 2 of my adventures in Cuba!