Gods of the Mexican Sun

I lean in closer to study their decorative faces as Mariachi music booms bumpily through the store’s ancient scratchy speakers. 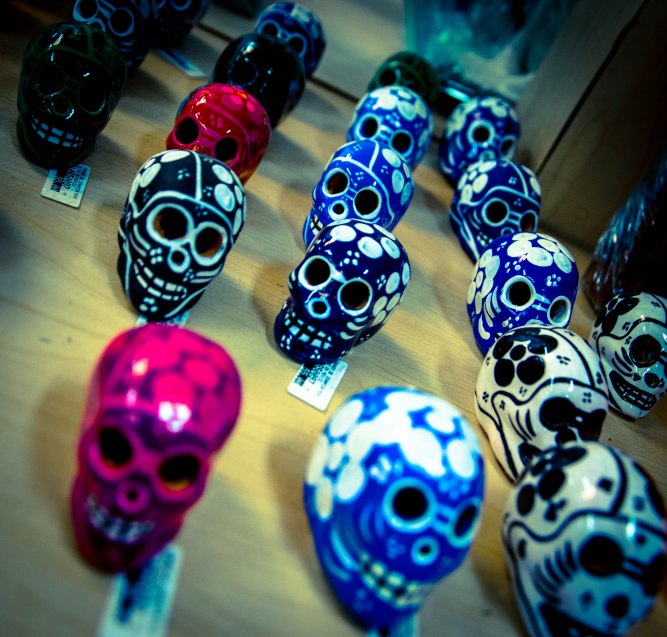 It’s sweltering inside this strange little market. I retreat to a bench outside to wait for my tour mates to finish their shopping so we can get a move on toward the day’s main site.

Traffic in Mexico City chugs, honks and lurches past me in wheezy gusts of exhaust. A young woman with a snoozing infant ensconced in rough woven fabric slung across her back offers me plastic baggies of sliced papaya. A middle-aged man hollers about fresh churros from behind his metal cart.

An older man, maybe 75 years of age, dressed in worn-out slacks, button down short-sleeved shirt and battered cowboy hat approaches my bench. His arm is bejeweled, layered from wrist to elbow in dangling cheap, blingy necklaces.

He steps closer and picks up the pendant of one of the necklaces in his gnarled, unsteady hand and holds it up to my eye. “Aqui. Look.” he insists. Despite myself, I do as he says and peek into the round hole. Inside, a teeny hologram flickers between an image of the baby Jesus and a thorn-draped cross, when tilted slightly from side to side. He murmurs,”Ahh? Boniiitaa.”

“Muy bonita,” I tell the man as kindly as I can, “Pero no gracias.” He looks crushed for a moment but shuffles off toward another woman I recognize from my tour group. I glance over my shoulder into the store, which brims with Catholic-themed tchotchkes and statues and crosses. The place is a nearly aglow with spangled shimmer, most of it priced for even the most modest of budgets.

This store is one of many such spectacles in this deeply spiritual region. I would soon learn that spirituality has been an incredibly all-encompassing aspect of life in this part of the world for a very, very long time.

At last, all of my companions have made their purchases and are now trickling out to the sidewalk where we’re afforded a decent view of the enormous modern-styled Metropolitan Cathedral, from which we’ve just come. This is also where, only weeks earlier, Pope Francis had admonished his bishops not to “place your faith in the ‘chariots and horses’ of today’s pharaohs.”

Boarding the tour bus, we roll into the gritty streets toward the highway that will whisk us 25 miles northeast from Mexico City. Outside my window, churches from varying eras, and citizens in the midst of daily life glide smoothly by.

Before arriving at our ultimate destination, my companions and I are treated to a time-honored Mexican specialty: Tequila.

To say I’ve never been a fan of tequila is an understatement. I capital H Hate it.

Both for its gasoline taste, and for the fact that it was an accomplice in the one and only table dancing incident of my life, a million moons ago when I was in college.

“You’ve probably never had high quality tequila,” says our guide Pedro, echoing the sentiments of nearly everyone I’ve ever met who refuses to accept that I Hate tequila. I smother the cynical comment that leaps to my tongue.

Pedro leads us to a monstrous octopus-like agave plant and, whipping out a jack knife, deftly lops off the end of one of its green fleshy arms.

Since the first century, the people of this region have used the stiff agave spikes as weapons and sewing needles. The waxy, filmy skin of the plant was once peeled off like a wet shirt sleeve to serve as writing paper (their answer to Egypt’s papyrus). Its fibers were transformed into rope and clothing. Its flowers and roots were cooked for food, and its sweet sap was (and still is) a superb alternative to sugar.

The sap has another clever use.

When fermented, it becomes pulque, a white, milky textured alcohol. Pedro presents us with trays of the stuff to try — I decide it’s not bad, it has a slight banana milkshake taste to it.

Next, we’re offered shots of tequila, made from the cooked hearts of the blue agave.

“This tequila has a slight sweet taste, like honey,” Pedro insists, handing out the shots along with a slice of lime for each of us. “It’s very high quality, most people who try it like it.”

On the count of three, everyone bites down on their lime and then throws back the tequila.

It’s surprisingly… not utterly horrible! The delicate honey flavor dulls the fierce jab of the alcohol taste that I usually Hate.

I tentatively decide to downgrade the capital H to a regular lowercase h from now on, while vowing to consume only high quality tequila (IF I ever find myself in the predicament of having to drink it again).

Thankfully, I escape this tasting without setting foot upon a single table.

Distant, low mountains ripple across the horizon. It takes several minutes of gazing placidly through the window of the bus before I notice that two of the mountains are, in fact, not mountains at all.

I’ve arrived at the ruins of the city of Teotihuacán, meaning birthplace of the gods.

Manifested around 2,100 years ago by the Teotihuacáns, an enigmatic pre-Aztec tribe, this ancient center was simultaneously advanced and civilized — and terrifyingly regressive and brutal.

Or so I would learn.

In a camel train of backpacks, cameras and selfie sticks, the group trots after our guide, Anita,  through the site entrance, which is strewn with squarish boulders in various stages of crumble. We enter a large excavated building, the Palace of the Quetzalpapalotl, where cold, thick walls greet us with the vivid likenesses of gods: jaguars, serpents, spiders, hawks and other fearsome beasts.

The far side of the complex opens up to a view of slanted stepped stones that flow up and down a series of towering blockish structures.

Anita leads the group to a ledge where she stands to face us, sweeps her hand toward a straight, wide dirt path that runs through the site, linking two enormous pyramids.

And there were, it seems, a lot of sacrifices.

Of citizens, enemy prisoners of war, animals by the hundreds — to appease the gods at every turn; particularly the Great Goddess of Teotihuacan, the deity of water, fertility, the earth, and creation.

Each raised platform lining the Avenue of the Dead served as a ceremonial execution stage. As the largest-populated center of the New World (and the sixth largest in the entire world during its zenith), the Teotihuacáns could afford to lose a few people here and there to ensure they had all their spiritual bases covered. 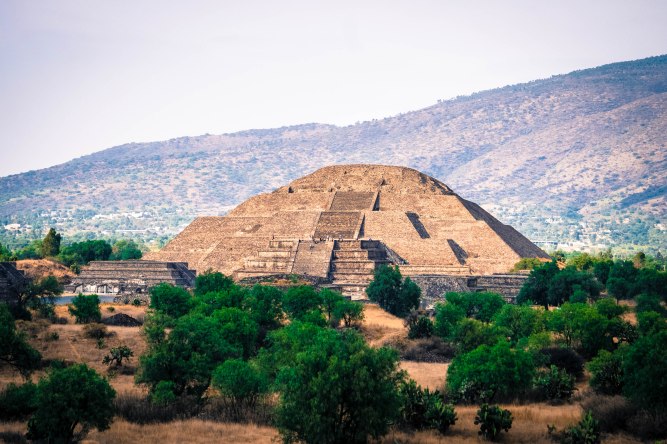 To our left is the hulking and mysteriously lovely Pyramid of the Moon, which mimics the contours of Mt. Cerro Gordo behind it. This loomed large to the Teotihuacans; a protective mother, serene and benevolent like the quiet moon each night.

“Now you can climb it if you like,” Anita tells us, releasing us into this ancient playground.

I stride directly toward the Pyramid of the Moon and begin to haul myself up the steep steps. In the pummeling afternoon heat, it’s no easy task and my clothes quickly become weighted and clingy with sweat.

At the top, I’m gasping for breath but can finally take in my first staggering view, straight down the Avenue of the Dead. 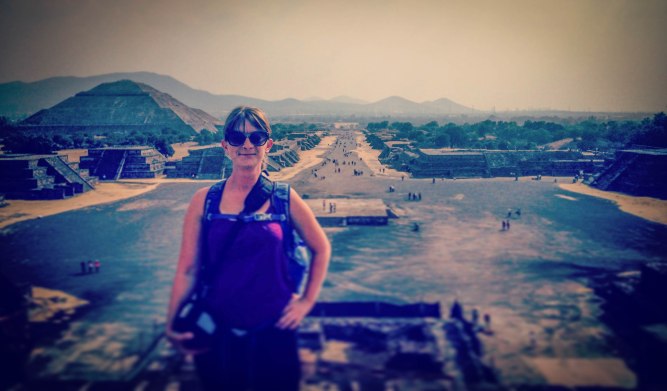 After a precarious descent, I amble toward the Pyramid of the Sun, the biggest pyramid at Teotihuacan, stopping occasionally to lethargically scale a few of the smaller sacrificial platforms.

Sitting alone on a high step with a dry wind erasing the sounds of other tourists, I let my imagination crank into action, painting me invisibly into the background of the year 200.

In flashes, I recreate rough-hewn tents of a bustling marketplace along the avenue, where rag-clad Teotihuacans sew goods using agave needles, butcher meat with shards of glossy black obsidian, get drunk on pulque, and prepare wolves and pumas and snakes for bloody sacrifice.

On this very step, the people must have worshipped; praying and listening, perhaps shouting, perhaps shivering in terror at the sight of a man’s heart being ripped from his chest, or locked into a cage to be buried alive. 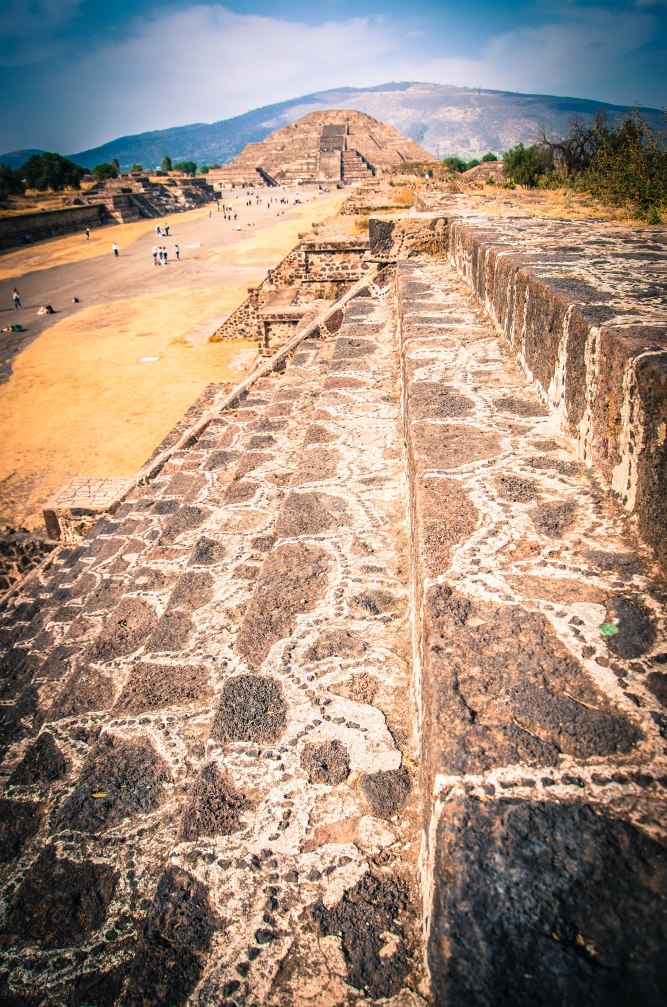 My mind doesn’t relish those thoughts. A sharp chill passes through me despite the heat.

The Pyramid of the Sun points to the setting sun on exactly two days of the year, auspicious days according to the Mayan calendar. It’s also the third tallest pyramid in all of the world. This makes it a special kind of torture to ascend as whipping winds, simmering late afternoon sun, and the innumerable stone megaliths seem to fight back against every upward step I take.

Forever later, just as I am nearly successful at talking myself out of the need to reach the top, the summit appears. I drag myself choking up the last flight and stumble breathlessly to the pinnacle.

When I turn around, a scene unfurls before me, beyond the Avenue of the Dead, that can only be described… as divine.

I surrender my heart to the many gods of this miraculous place, beneath the warmth of the Mexican sun. 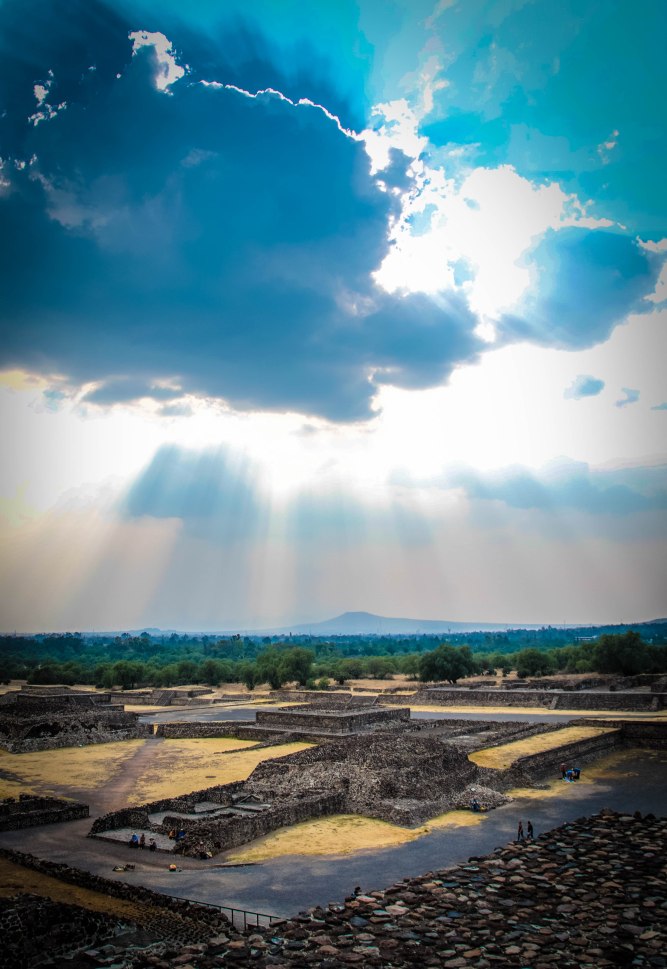 Next up: I head to crazy, colorful Cuba!