In Central America, the Jungles Howl

The windows of my room rattled with such demonic ferocity that I feared the tremendous gusts might actually break through the slatted glass panes standing between me and the dense, green mountains of Boquete.

I’d been warned about this. 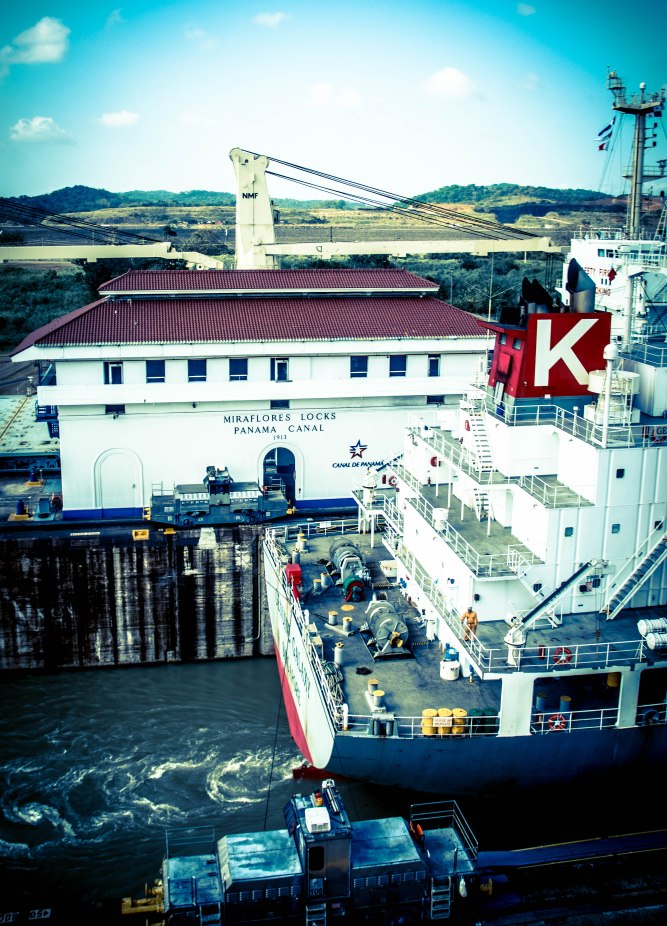 Two days ago in Panama City, I’d struck up a conversation with Juan, my grandfatherly taxi driver, as he carted me to and from the Panama Canal in his lightly crumpled, dusty red four-door. He asked about my travel plans for his country, and we attempted to answer each other’s questions in one another’s language.

Juan made a whoosh-ing sound and waved his hands erratically around his head. At the time, I was baffled and had no idea what he was trying to get at.

But now, as I hunkered down in the bed of my hostel, windbreaker zipped up, blankets drawn around me against the howling chill bursting through quaking window slats, I completely understood. 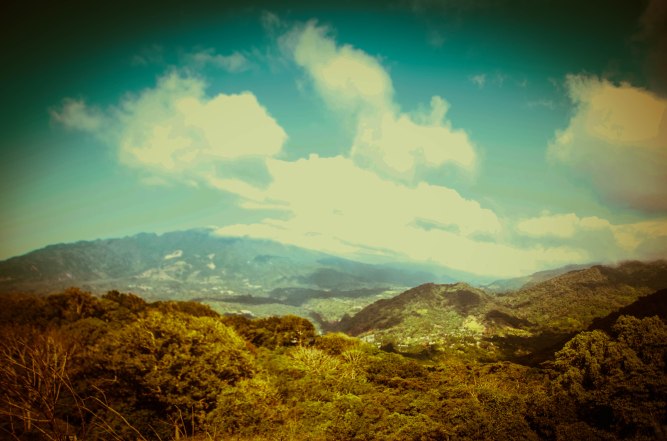 My second day in Boquete began in the very jungles that had thrashed shrilly outside my hostel the night before.

A tourist jeep with two long benches affixed to the back bounced up the jarring switchbacks of a mountainous dirt road. It was loaded with a gaggle of Americans (Panama is becoming popular with expat retirees), which was somewhat disconcerting to me. I hadn’t been around so many of my own countrymen in nearly a year, and it was odd conversing in unaccented English about everyday American topics, with 100% understanding. 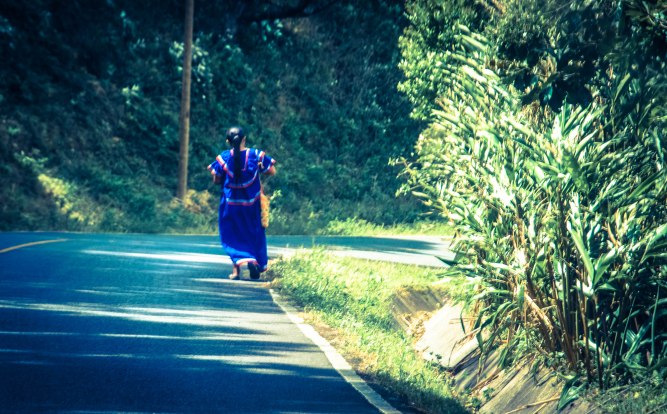 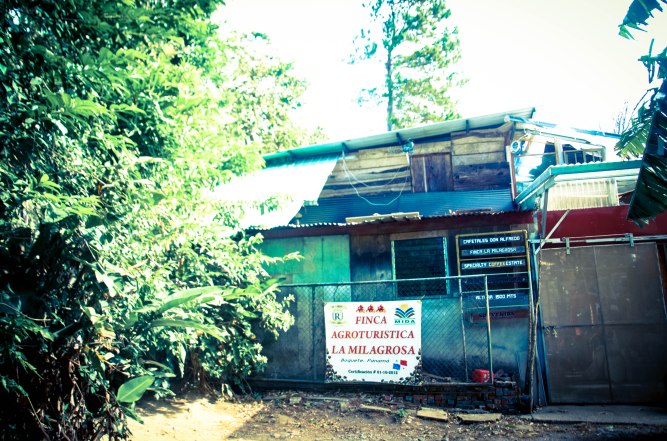 We pulled up to a coffee plantation, a very small local producer, run by a gentle yet spunky older man called Tito. Tito, I learned, is quite a fascinating guy. 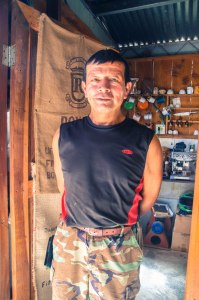 In his mid-60s but appearing closer to mid-40s, he will tell you he’s been married for 40 years… to his plantation. And he has many children… all of which are different types of coffee cherry trees.

Stepping carefully around chickens and over occasional heaps of junk, we ambled through the tangled fruit-bearing trees (yep, coffee “cherries” are fruit, and the “bean” is the seed), planted decades ago in no particular pattern. In the early days, Tito didn’t know or care if the various trees should be planted according to species — but he’s also never been one to follow prescribed guidelines anyway.

In the processing area, a tiny space where tourists gather for a demonstration, the pale, buttery-colored beans that have been drying outside for a number of days, are prepared for roasting. 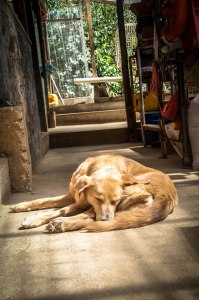 Chunky, clunky-looking machines take up a lot of real estate in this dilapidated building. The guide tells us that instead of purchasing insanely expensive store-bought machines to do the work of separating the coffee cherry flesh from the seed, as well as a few other major tasks — Tito cobbled together these machines himself.

That piece right there? Came off an old Chevvy. This part inside? Two sink drain pipes welded together. And the rumbling Frankenstein contraptions that handle the roasting itself? An old vacuum and a laundry dryer.

Even the spoon used to dig roasted beans out of the roaster for tourists to sample is made of a length of iron welded to a kitchen spoon.

After the coffee beans have gone through every former appliance and car part imaginable, they emerge with a heavenly, sweet aroma. A quick run through the (of course homemade) grinder, and a few moments for brewing later, we were treated to tiny piping mugs of some of the most delicious, creamy coffee I think I’ve ever tasted. 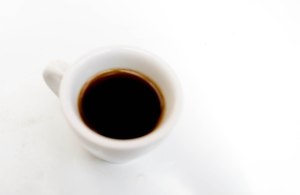 Before leaving, I shook Tito’s weathered, callused hand and thanked him, telling him in broken Spanish how much I enjoyed the fruits of his labor. He gave a quiet, shy smile that seemed too humble for a man who has almost single-handedly constructed a lively miniature coffee empire in the hills of Panama… from fragments of lifeless vacuums and pickup trucks.

Later that day, I sat outdoors at a cafe near my hostel and sipped yet another rich, addictive cup of Panamanian coffee and read a book in the cool late afternoon sunshine. A light mist crept in and soon grew robust; a slow-motion drizzle tethered to a blossoming nocturnal wind.

I retreated to my hostel, by now fully understanding what this breezy child would quickly mature into. As I again put on my windbreaker, I caught the chilly air’s soft whistle gradually rising. 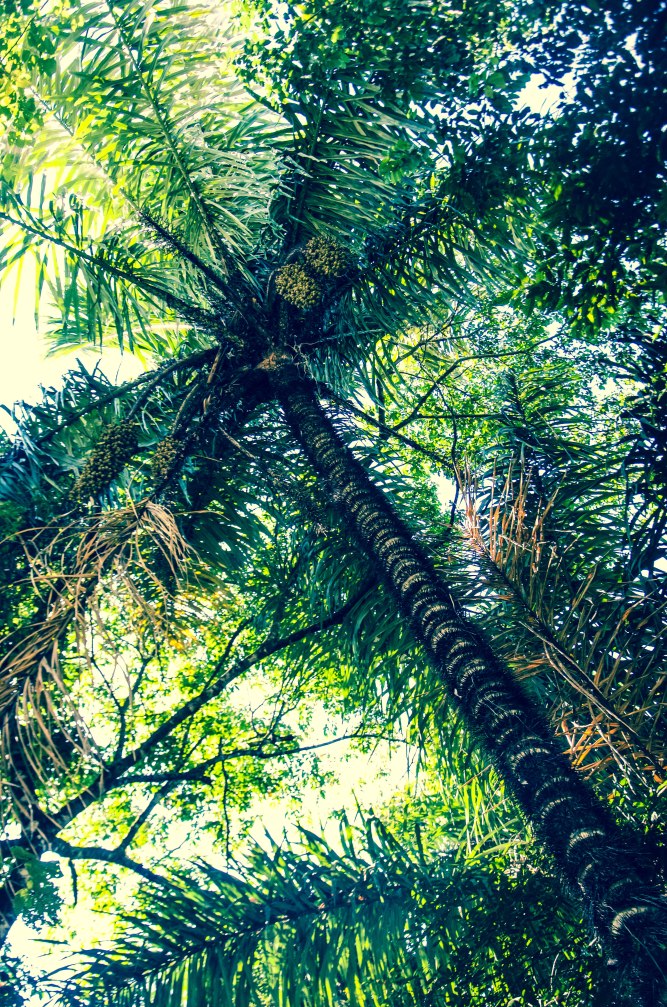 A reverberating, deep-throated cacophony of howls rang through the rainforest canopy in Manuel Antonio National Park. I couldn’t tell which direction it was coming from — it seemed to be everywhere at once. I felt the hairs on my arms and the back of my neck stand up and my stomach pinch with instinctive nervousness. The calls were fundamentally threatening.

“Howler monkeys,” said my guide Enrique, speaking casually while he positioned the tripod attached to his telescope to focus on some nearly-invisible forest creature he’d just spotted with his freakishly well-trained eye. “Males. One is saying ‘this is my territory’ to the others, and the others are saying to him, ‘no way, José. It’s ours now.’ They will probably fight. You see lots of scars on them. They’re vicious.” Then he stepped back from his telescope and exclaimed cheerfully, “Look here — it’s a little land crab!” 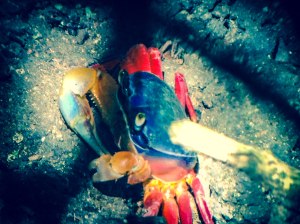 I peeked at the bright red and blue crab while keeping my ears attuned to the barking echoes and crashing resonances building in the trees behind me. A war between the strongest monkeys in Costa Rica was underway, the attacks partially hidden by towering clouds of verdant leaves.

Enrique miraculously picked out a miniscule brown lizard resting among perfectly matched dry sticks. Then he immediately pointed out a bat, a large poisonous spider, a tiny walking stick insect, a napping female howler monkey, a white-faced capuchin, and an animal I had been looking forward to seeing… frankly, my entire life.

A three-toed sloth clasped a tree trunk high above us. “He’s sleeping. They can sleep for days or even weeks at a time to conserve energy.” In awe, I wanted nothing more in that moment than to scale the tree and gaze into his adorable furry face while he snoozed with that glad sloth smile they always appear to wear.

In the late afternoon, I let the shores of the playa lure me with soft, warm sand and the mesmerizing, blinding sheen of the ocean. In front of me, surfers paddled in the direction of distant rocky protrusions, and a sprinkling of vacationing families and hand-in-hand couples meandered peacefully past me.

I stayed there for a long time, turned away from the mysterious, lovely, but unpredictable jungle. The sun was well into the process of dipping itself in the fiery liquid gold when I heard it again.

A hideous growing siren of sandpaper howls. They seemed to be approaching like a train from… where? I couldn’t tell, but wariness began to sting my stomach.

With significant effort, I tore my worried thoughts away from the sound and forced my ears to tune in once again to the gentle surging of the waves. After a while, they were all I sensed and I relaxed. Soon, a veil of euphoria descended over me and the enchanted scene soothed me like a drug, addictive and beautiful.

I had been warned about this.

I listened to the Pacific Ocean sing until the last of the light slipped away, and felt only joy. 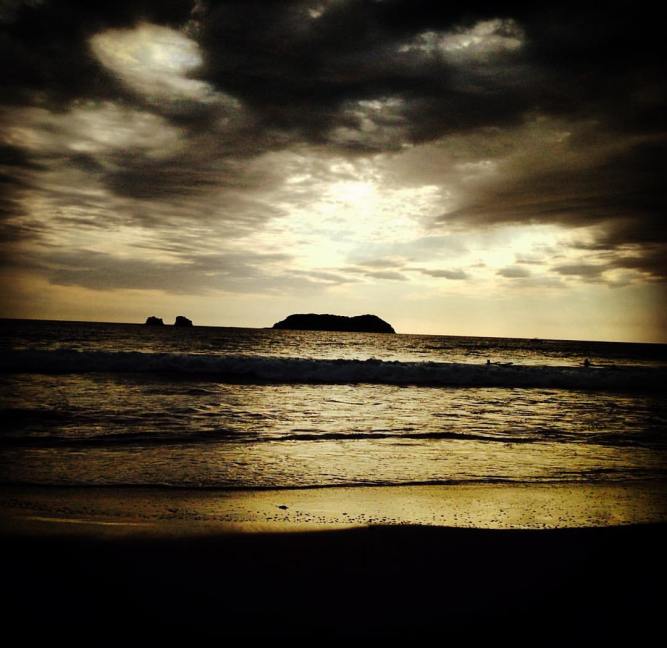 Next up: More stories from incredible Costa Rica!