Slipping through the narrow doorframe of my homestay, I glance down and at the last second, hurl myself to the right just in time to avoid squashing a canang sari, an offering to the Hindu gods. Ketut, my shy, kind-eyed Balinese tour guide for the day, smiles almost sympathetically at my flailing.

A canang sari (meaning “beautiful purpose” in Kawi) is a small palm leaf tray loaded with flowers, fruits, nuts and incense. Ketut tells me that each symbolizes specific devas, or gods. During my weeklong stay in Ubud, I would find myself carefully stepping over and around these vibrant ornaments many times.

I climb into my guide’s immaculate silver car and ask how often the offerings are made. As we pull away from the homestay and merge into Ubud’s relatively relaxed traffic flow, he answers, “Every day in Bali is new offering. When we prepare, is only very small sacrifice to thank gods for peace given to the world.”

Empire of the Hippies

Passing through downtown Ubud, I begin to feel as though I’ve entered a micro kingdom comprised almost exclusively of modern-day hippies, of the tourist and ex-pat variety. Here, comfortable spandex tops and yoga pants are the customary garb. It seems that the number of yoga and meditation centers are only slightly outnumbered by all-organic juice bars and vegetarian… vegan… gluten-free… lactose-free… raw food… restaurants boasting varying takes on tempeh, spinach pasta and tofu.

My newly-acquainted friend from the homestay, Erin, is taking a month-long yoga teaching certification class at the Yoga Barn. For her, it’s an opportunity to exploit a build-up of ‘use-them-or-lose-them’ vacation days from her dot-com job in the U.S., while learning more about a practice that brings her palpable peacefulness amid the mad careening of life.

Some of my favorite Ubud moments are had at breakfast or dinner with our homestay mates, listening to Erin’s tales of the spectrum of quirky personalities in her class.

For example, the girl on the juice-only diet who couldn’t understand why it was so difficult to get through an hour-long meditation without feeling faint. Or the girl whose goal was to become a “breatharian” and survive on light and air alone. Or the two girls who would randomly burst into wailing sobs for no apparent reason.

Ketut and I are standing at the cusp of a waist-deep pool of water watching as a chain of thousand year-old carved stone pipes spout water funneled in from the Tirta Empul temple’s holy spring, which bubbles up in black underwater clouds into a pond nearby.

Canang saris are stacked like colorful pancakes above the showers, offerings to Vishnu, the god to which this entire temple is dedicated. The showers are meant to purify the person who bathes in them, and many people are presently doing just that; moving from one shower to the next, down the line, hands held together in prayer.

Ketut tells me I can go in, but I feel uncertain. I’m not Hindu (or any religion, for that matter) and it seems somehow disrespectful to sully the sacred water with my non-believer-ness.

My guide assures me it’s ok if I’m not Hindu, the water is for everyone.

It IS scorching hot out and the water looks cool and inviting…and I did bring a swimsuit to change into. So I find the changing rooms and wait my turn to enter a stall, which is already drenched by the day’s succession of purified souls.

When I return to the showers, I find the area has become inundated by a bustling tour group, their shiny zoom-lens cameras are zeroed in, snapping unabashedly away at the bathers. I’m suddenly overwhelmed by self-consciousness; my plan makes an emergency crash landing and I instead plop down at the pool’s edge, dunking my legs into the soothing chilly spring water.

I sit for a while, so mesmerized by the sound of the showers and the coolness and the calming scene before me that I even manage to block out the commotion behind me.

Finally Ketut taps me on the shoulder, “Maybe I wait in the car?”

I grant myself another five seconds of bliss, then pull myself away from the water and head back to the changing rooms.

A daunting set of cement stairs disappears into a green valley of rice terraces and temples. From the top of the stairs, I can’t see the Royal Temples (which are actually royal tombs) yet; they’re hidden from view by towering coconut palms and the rough, snaking line of the terraces.

Once on the valley floor, several trails fan out before me in different directions, creating an irresistible “Choose Your Own Adventure” scenario. I randomly pick left. Jackpot.

It almost immediately opens up to reveal fascinating ancient dwellings and grand Balinese shrines carved straight into the rock faces. In an instant, I’m a kid again, racing into caves, stumbling across hidden temples and tombs; a sense of complete wonder flowing through me.

Along the way I spot locals, people who’ve likely grown up within reach of the temples, going about their business. A thin, aging woman scrubs large baskets clean in the river, her skirt is hiked and pinched between her legs to keep it dry.

Among the rice terraces, I nearly trip over an old man with dark, weathered skin. He’s dressed in ragged clothes and crouches quietly on a dirt path, hoping to sell handmade reed hats to passers-by. For a second, though I don’t really want a hat, I consider buying one from him, wondering if he needs money for food. In the end I refrain, reminding myself that I can’t buy everything or give money to everybody who looks scrawny. I just can’t. I feel guilty and relieved when the man doesn’t look up as I scurry past.

Close to two hours of hiking up, down and around the valley has worn me out. I take a last look at this spectacular place and begin the unappealing task of hauling myself back up the never-ending stairway in blazing midday heat.

One of Bali’s specialties is its coffee and tea, Ketut tells me as we pull up to a popular local producer of the tasty beverages.

From the parking lot I crunch my way down a gravel path through a miniature jungle of tea and coffee plants. I arrive at a small hut where a girl called Ni Luh ushers me toward a table laden with great bowls of coffee beans.

She explains the difference between the various types, and then shows me a particular kind that I had only heard-tell of before; the stuff of myth and legend: civet coffee beans.

If you’re a true coffee connoisseur, you are already fully aware of how high-end civet coffee (or kopi luwak, as it’s referred to here) is produced.

If not, all you really need to know is that the civet, a fluffy weasel-like creature, is fond of the fleshy coffee bean cherries. It eats only the highest quality cherries, which pass through its digestive tract where certain chemical transactions take place, and when the (still whole) beans emerge from the other end, they have been bestowed with a flavor that supposedly makes the coffee extra smooth… and perhaps just a little bit nuttier in taste.

Ni Luh talks me through the process of washing, toasting (with a live demonstration on hand) and grinding of the coffee beans. Next, I’m lead further up the trail to a shaded bungalow, and seated at a long table with other tourists. A tray arrives to deliver a tea and coffee sampling.

…and it is all amazing.

I love coffee, but I’ve never been much of a tea person. However — hallelujah, call me a convert!

The coffees in flavors like coconut, ginseng, and vanilla make me strangely nostalgic for the snowy winter days and crackling fires of my years living in Michigan. Fragrant steam wafts from the teas, which come in unusual flavors including saffron, mangosteen, ginger, rosella, lemongrass, and (shockingly good) red rice tea.

“Uh…sure.” How can I not? But then I remember the astronomical prices I’ve heard about. “Wait, how much is it?”

A few minutes later, she brings out a white ceramic cup and saucer. I ask if I can have sugar and milk, but she advises that those items will effectively ruin the experience. I brace myself for an explosion of flavor magic, and take a sip…

Ni Luh is leaning subtly forward in anticipation. “You like?”

As if I were tasting wine, I swish it over my palate and then swallow it down. I involuntarily scrunch my nose. “Eh. It’s alright.”

I nod. She seems disappointed. I sip at the coffee some more, trying to figure out if I’m just crazy — but the drink doesn’t get any better, it just gets colder. While I’m mulling over the kopi luwak, Ni Luh plants herself opposite me. Soon she begins glancing at me every few seconds, getting visibly antsy.

Reluctant to abandon my tray of delicious potions (though I’m still not a fan of the civet coffee), I finally rise and let her take me to the inevitable gift shop, where despite my conviction not to spend any money, I buy a package of coconut flavored coffee. The beans are ground so finely it feels like a bag of powdered sugar in my hands.

Mount Batur, rising 5,633 ft above sea level, is considered sacred to the local Hindu people. Its shadow at certain times of the day stretches over the caldera, mingling with the blackened turf it incinerated as recently as the year 2000.

“Were you here for the eruption?” I ask Ketut, who stands beside me at a vista point along the road. Wind sailing across the dipping landscape claws at his blue button down shirt.

“Yes. Was very big, lot of smoke. You can see from very far away.”

Ketut thinks about this then shakes his head, “No. Not scary. Was not so bad.”

It strikes me as a rather Zen thing to say. However, I was quickly learning that this calm, unworried and unhurried attitude was simply the Balinese way. 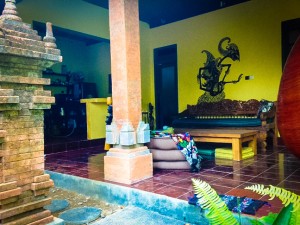 I am returned to my welcoming homestay by late afternoon. On the ride back, my guide skirts the touristic downtown Ubud area, which to me, is haunted by the yogi ghost of Elizabeth Gilbert’s younger, angsty-er self. He opts instead for the maze of quieter side streets where the “real” Balinese live. Here I notice more shrines and canang sari than anywhere else.

I recall what Ketut told me earlier about them:

“Every day in Bali is new offering. When we prepare, is only very small sacrifice to thank gods for peace given to the world.”

At the door to the homestay, I pause. I glance around quickly to make sure nobody can see me, then I put my hands together and give a quick nod at the canang sari, out of thankfulness, before heading inside.

I’m not Hindu, but that’s ok. Being thankful is for everyone. 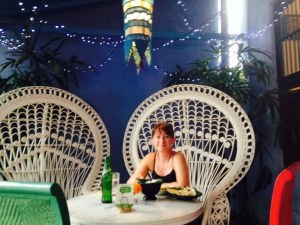